Lynette Yiadom-Boakye at the Tate Britain

Lynette Yiadom-Boakye’s exhibit at the Tate Britain invites us to see portraits of black individuals as they always have been, but have been deprived of representation of throughout art history.
Published in
Museums 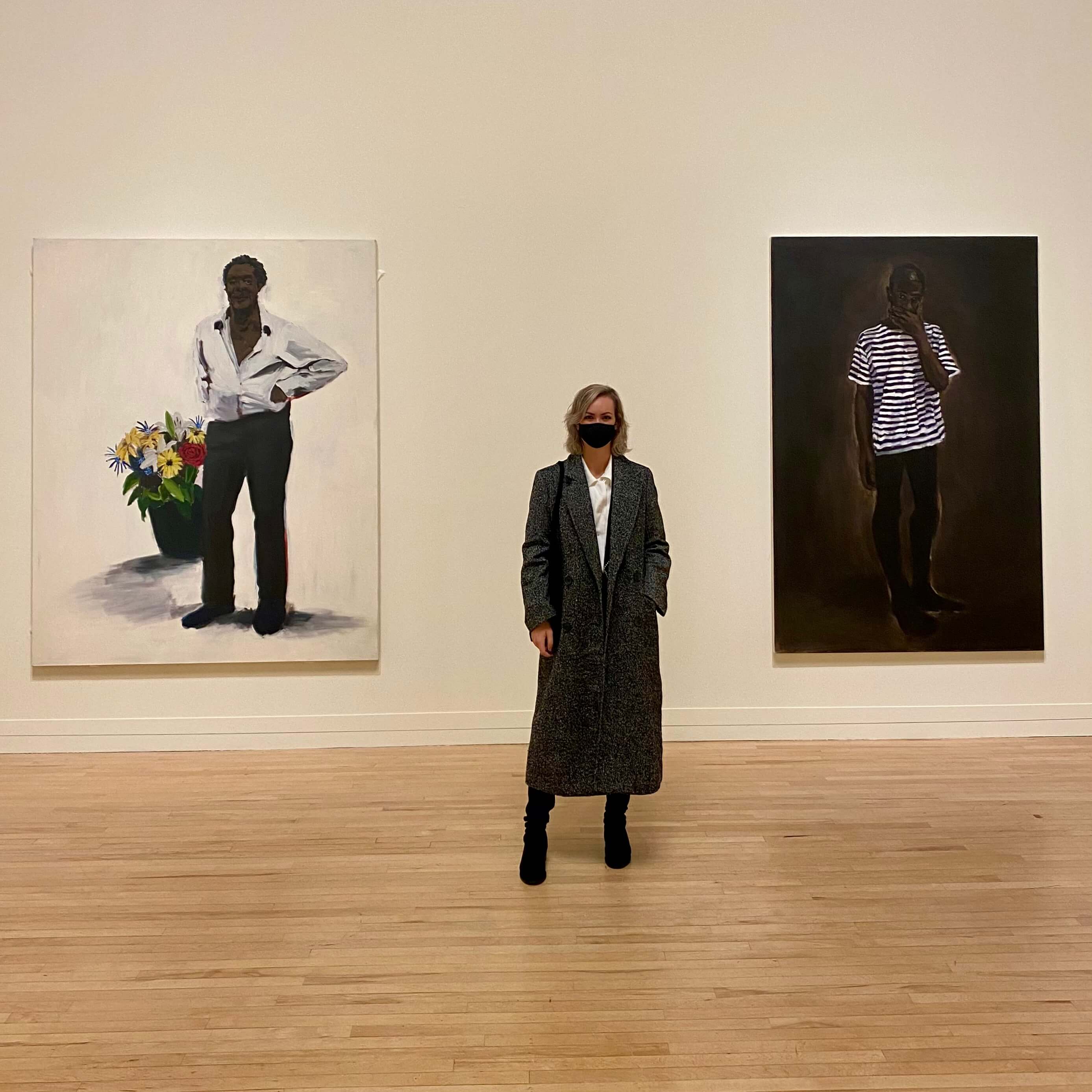 Lynette Yiadom-Boakye at the Tate Britain

About the Exhibit - Fly In League With the Night

Lynette Yiadom-Boakye’s exhibit, Fly In League With the Night, at the Tate Britain is on view from December 2nd, until May 2021. This was actually my first visit to the Tate Britain and although it’s smaller than the Tate Modern I really loved the architecture and detail of the space.

I’ve had the privilege of seeing an exhibit of Yiadom-Boakye’s at Jack Shainman Gallery last year, but the scale of the exhibit is even more impressive, consisting of 80 works from 2003 to the present day.

Lynette Yiadom-Boakye has reinvented one of the most traditional forms of art - portraiture (particularly in oil paint). Similar to how dutch masters fantasized their subject matter, Yiadom-Boakye imagines her subjects in such detail that you feel they’re almost more real than actual humans.

“The figures in Yiadom-Boakye’s paintings are not real people – she creates them from found images and her own imagination. Both familiar and mysterious, they invite viewers to project their own interpretations, and raise important questions of identity and representation.” (source)

I’m sure it’s deeply personal and exciting for Lynette to have a major museum show in her home country. Lynette Yiadom-Boakye currently lives and works London.

“She has turned Tate Britain on its head.” - The Guardian (source)

“That Yiadom-Boakye’s subjects happen to be black, reflecting her own identity, reminds us of the overwhelming whiteness of this tradition.” - Alex Farquharson (source)

For too long, especially in Europe, we see the same oil paintings of white male and female aristocracy or royalty. Lynette Yiadom-Boakye brings the same elevation to her subjects but portrays her own race that’s completely missing from art history.

“Yiadom-Boakye wants to capture the evanescence of mood, not burden us with narrative detail.” - Andrea Schlieker (source)

The thing I love most about museum exhibits devoted to an artist’s career is the ability to see how the artist has evolved over time. Around 2006 Yiadom-Boakye leaned heavily into creating paintings with a heavy, dark, monochromatic color scheme where the figure was almost lost and kept at a distance.

“Over time I realized I needed to think less about the subject, and more about the painting. So I began to think seriously about colour, light, and composition. I was always more interested in the painting than I was in the people.” - Lynette Yiadom-Boakye

Another thing to note about Lynette Yiadom-Boakye’s figures is that they’re confident and empowered but also at peace, living in the moment, almost at leisure. Lynette Yiadom-Boakye purposefully creates her subject in this manner to fight how Black subjects have been portrayed in portraits of the past, often in subservient or marginalized roles.

“If they are pathetic, they don’t survive - if I feel sorry for someone, I get rid of them. I don’t like to paint victims.” - Lynette Yiadom-Boakye

“Yiadom-Boakye is interested in black society, not as it was affected or shaped by the white world, but as it exists unto itself.” - Hilton AIs

“In a world dominated by an inflation of images, words and noise, of continually expanding metropoles, ever greater pressures of work and the increasing velocity of life, it becomes both psychologically and politically important to assert these spaces of stillness and repose, places in which people are doing nothing.” - Andrea Schlieker

“Lynett Yiadom-Boakye’s paintings believe in and make available that indelible truth. We may sometimes struggle to see each other, to come near each other. We may stand in close proximity and look directly at each other, as her paintings invite, but it takes several passes, several exchanges, the passage of time, to actually see and know each other more deeply.” - Elizabeth Alexander

A small and unique detail that I really appreciated about the show was the personalized Spotify playlist Lynette created, as well as a list of books that inspire her. The Art Newspaper wrote up a great article about how this is becoming more commonplace with exhibitions, and I’m excited by this since it creates a new way to not only connect with the art but the artist when viewing the works.

About the Artist - Lynette Yiadom-Boakye

“Lynette Yiadom–Boakye is a British artist and writer. She is known for her enigmatic portraits of fictitious people, created from found images and her own imagination.”  - The Tate (source)

After this exhibit at The Tate Britain, it will travel to the Guggenheim Bilbao in Spain.