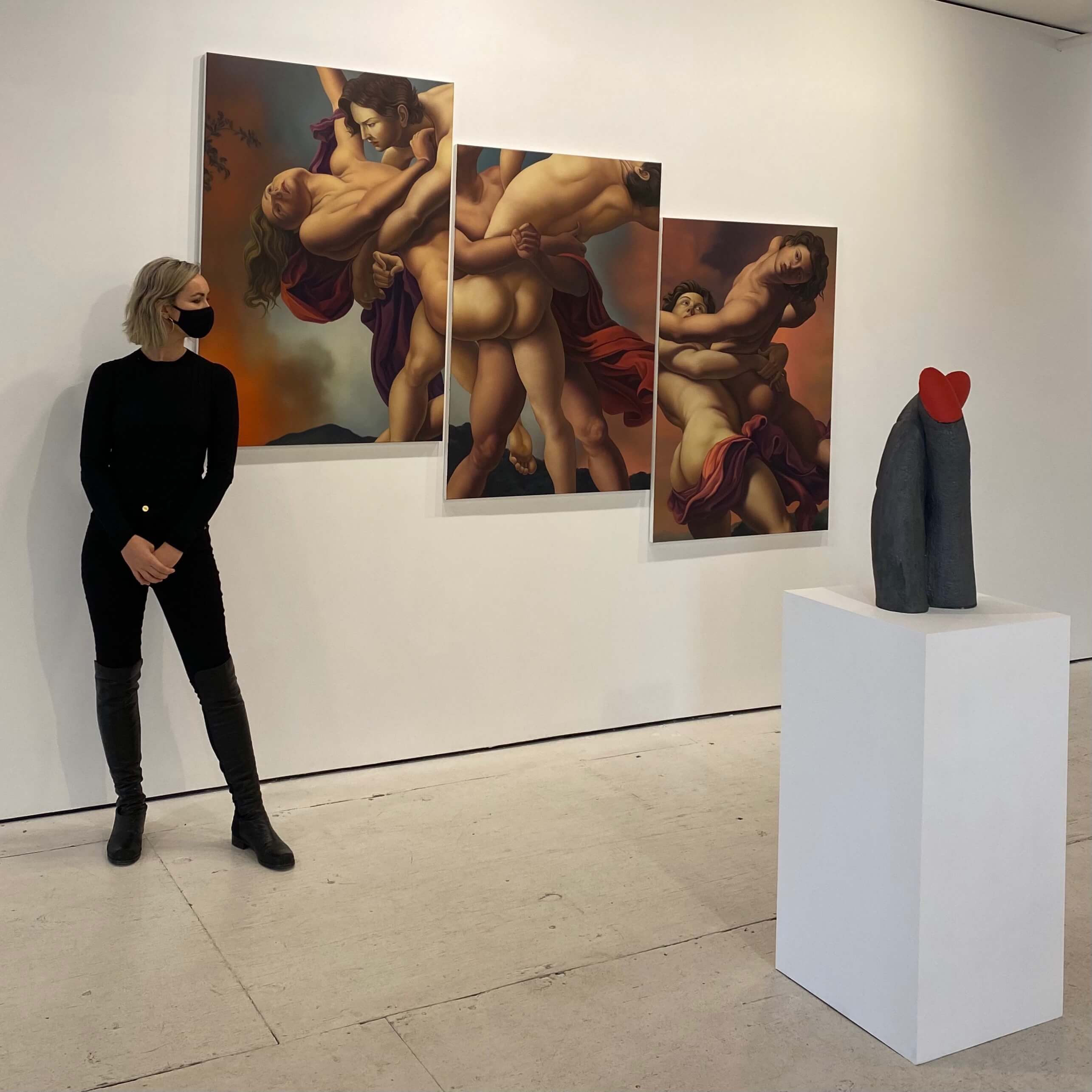 “‘X’ frames a conversation between two mid-career artists, each immersed in her own philosophical, thematic and technical trajectories, who nonetheless find numerous points of dialog and exchange. ‘X’ might variously be understood as an intersection, a collaboration, a multiplication, or an excision.” - Jonathan Griffin (source)

“[Oil paint and clay] are both naturally suited to the depiction of the human form. In this exhibition, oil paint and clay manifest both mainstream and marginal embodiments of feminine beauty, desire, desirability and power.”  - Jonathan Griffin (source)

In both the artist’s works, there is an entanglement of figures that represents femininity and power.

"Throughout the exhibition, fingers and figures intertwine, gestures are liberated from their original contexts, and bodies are frozen in the midst of dramatic action." - Jonathan Griffin (source)

Mockrin brings her characteristic style that’s reminiscent of “European painting of the 17th and 18th centuries” but she gives it her signature twist in two ways. Mockrin strategically edits the scene by chopping it into pieces and zooming in on key parts of the figure, almost like a film producer.

Mockrin is not only inspired by the style of paintings of the 17th and 18th centuries in Europe; she’s inspired by the works created by Male artists that represent violence towards women throughout history. However she’s not glorifying these works in the same way of the past, she’s making them personal by editing the scenes to make the subject matter more about the struggle, the pain, and the shame these violent acts inflict.

Sahal also is “enraptured and enraged by that history, especially by its (mis)treatment of female subjects and perspectives (source).” She plays with gender stereotypes by calling out symbols that are typically associated with women such as bright red long nails and a golden vagina.

“In Sahal’s ceramic sculptures, abstracted forms waver in and out of bodily representation, gender identification and conventional standards of beauty and ugliness, transcendence and debasement.” - Jonathan Griffin (source)

To see a walkthrough of the exhibit, skip ahead to 12:38 in the video below.

About the Artists - Jesse Mockrin and Elsa Sahal

Elsa Sahal is a Parisian artist who lives and works in Paris. She attended the National School of Fine Arts, Paris in 2000.

Jesse Mockrin is an American artist who lives and works in LA. She received her M.F.A. from the University of California, San Diego, in 2011, and her B.A. from Barnard College, New York, in 2003.

She’s known for her figurative oil paintings that resemble work from old masters with a modern twist by cropping and editing the scenes.