Frieze New York is one of my favorite fairs of the year. It feels like galleries have been holding on to their best pieces to show off after the early fairs, but want to sell before the September show
Published in
Art Fairs 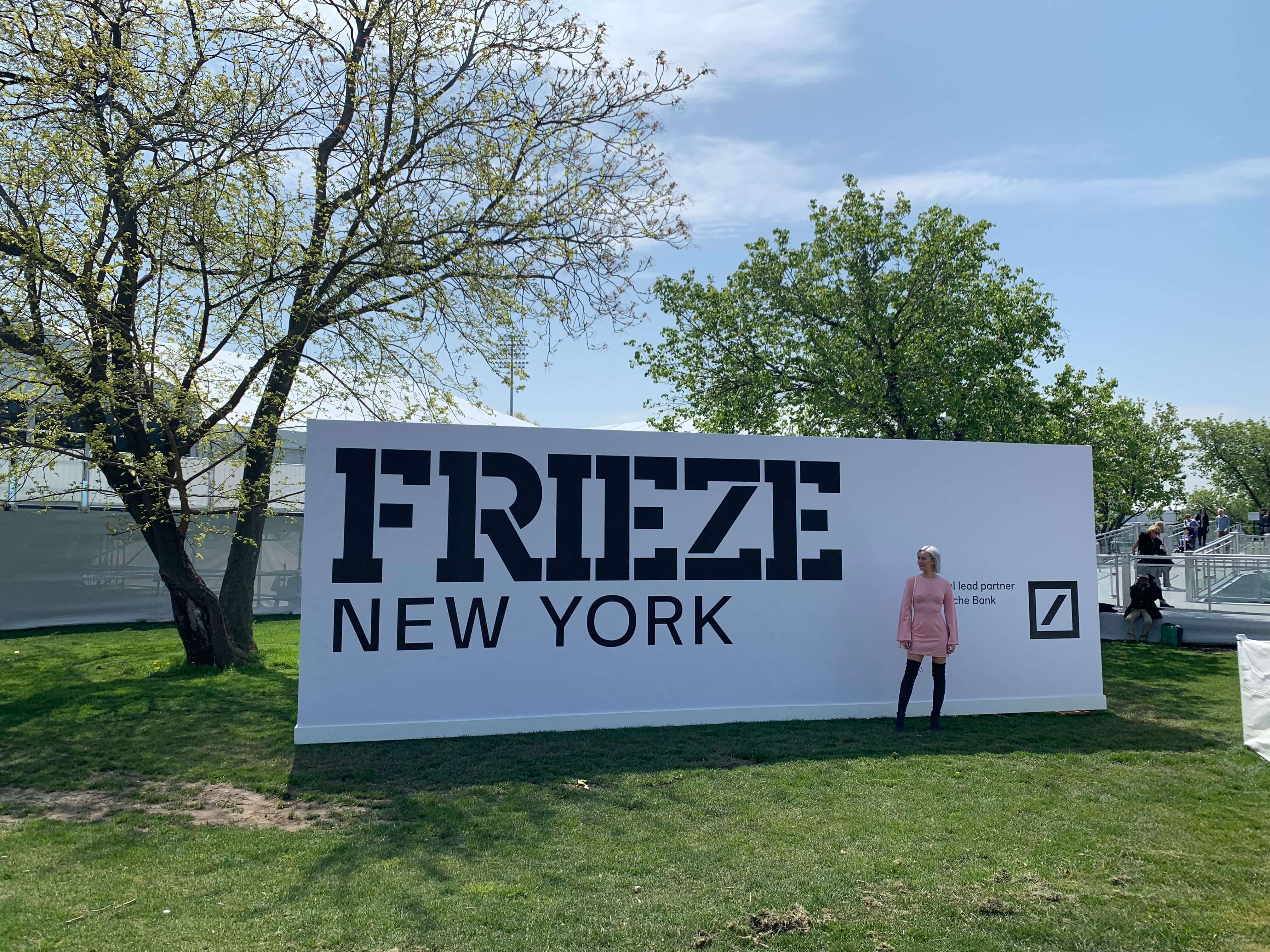 Frieze New York is one of my favorite fairs of the year, mostly because of it's timing. It basically sits nicely in the middle of all the fairs, so they save up their best pieces to sell before their September shows.

The fair itself is located on Randall's Island...which can be a bit annoying to venture out to, but the Ferry ride is beautiful (weather permitted) and there is always Roberta's Pizza.

Frieze (anywhere) is known for it's big white tent, which makes for a nice, open and airy space.

This year's exhibitor list can be found here. My personal favorites are below.

Right when you walk in, you're confronted with Victoria Miro's booth...and they did not waste an opportunity. Pictured above is a painting by Chris Ofili (who has an exhibition at David Zwirner's 69th St. location currently) and below it is Yayoi Kusama’s 'Narcissus Garden'. As expected, many Instagram photos were taken here.

On to the right you see a GIANT head by Jaume Plensa's Carlota, made out of stainless steel at Richard Gray's booth. This was great considering they were having to compete with a ton of chrome balls in the adjacent booth, so they definitely held their own with this work.

My personal favorite of their booth was this painting below by Jim Dine. I just love the color and texture (and scale obviously) of the work.

Casey Kaplan had a booth solely devoted to works by artist Matthew Ronay.

Marlborough...or is it Marlborough Contemporary...I wish they would just figure that out already, brought this majestic lion by artist Tony Matelli. Behind the lion are 'chain' works by Davina Semo.

I enjoyed Perrotin's booth (or from what I saw of it) at first. They had very strong works by all my Perrotin favorites like below (Bernard Frize) and Paola Pivi's bears.

It wouldn't be Perrotin without a Takashi Murakami (below).

Or a Daniel Arsham...

But when I turned the corner and saw works by Izumi Kato I was blown away.

Night Gallery is one of my favorite galleries, so I was very pleased to see an entire wall of their booth devoted to Derek Fordour, an artist who's show I had the privilege of seeing when I was in LA for their edition of Frieze.

I love Grant Levy-Lucero's sculpture's as well. My personal favorite (not pictured) is his Pepto Bismol.

I respect P.P.O.W for what they did with their booth this year. They sold works by artist Steve Keene for $5-$10. It reminds me a lot of what Chez Mohamed did at Material Art Fair with their art vending machine.

To keep on trend with the solo-artist-booths, Xavier Hufkens featured a nice variety of works by Thomas Houseago.

I'm always pumped to see CANADA at fairs nowadays since their gallery space in the LES has been closed for the past six months. That being said, I'm very excited to see their new space in Tribeca which will hopefully be open by September.

Their booth did not disappoint with this giant Katherine Bernhardt (above) filled with all of my favorite things (Nike, R2D2 and the pink panther that is).

I'd never heard of Jason Fox, but I dig it (above). Below is a classic by Katherine Bradford.

Nino Mier brought a handful of works by artist Michael Bauer. I had to get a detailed shot of the colors because they are just hypnotizing.

A room filled with works on paper by Natalie Frank. It was such a nice surprise, tucked away in the center of their booth.

Above is one of my favorite paintings of the fair by artist Lisa Brice, mostly because of her constant use of this cobalt blue color.

Overduin & Co is a new gallery to me, and an exciting one thanks to these paintings by Eliza Douglas. They're paintings of Josh Smith paintings, and couldn't be more timely since Smith has a show at David Zwirner currently.

Jack Shainman brought a strong group of works (per usual) - starting with this Becky Suss (below). I was first introduced to her works in February at Moca in Los Angeles and I've loved seeing them ever since.

I was super thrilled to see this Nick Cave work reigning over the booth (or keeping watch, however you want to look at it).

One of the most exciting young galleries (IMO), brought this modern mannequin by Steffan Bunte.

I really love the playfulness of this work by Alex Da Corte (below), especially since Karma has had lovely, but very serious shows over the past six months.

Lelong had not one, but two beautifully put together booths. This isn't surprising considering the caliber of exhibitions they put on every year (especially recently).

This colorful number above features the work of Sara Cain. In sharp contrast the booth below features work by Barthélémy Toguo.

The Real Highlight of Frieze

Roberta's Pizza...there's nothing more satisfying than pizza in the shade after seeing some of the worlds best art.