Vanessa German’s exhibit at Fort Gansevoort centers around ornate sculptures that offer joy, love, and protection for the souls of Black Americans
Published in
Galleries 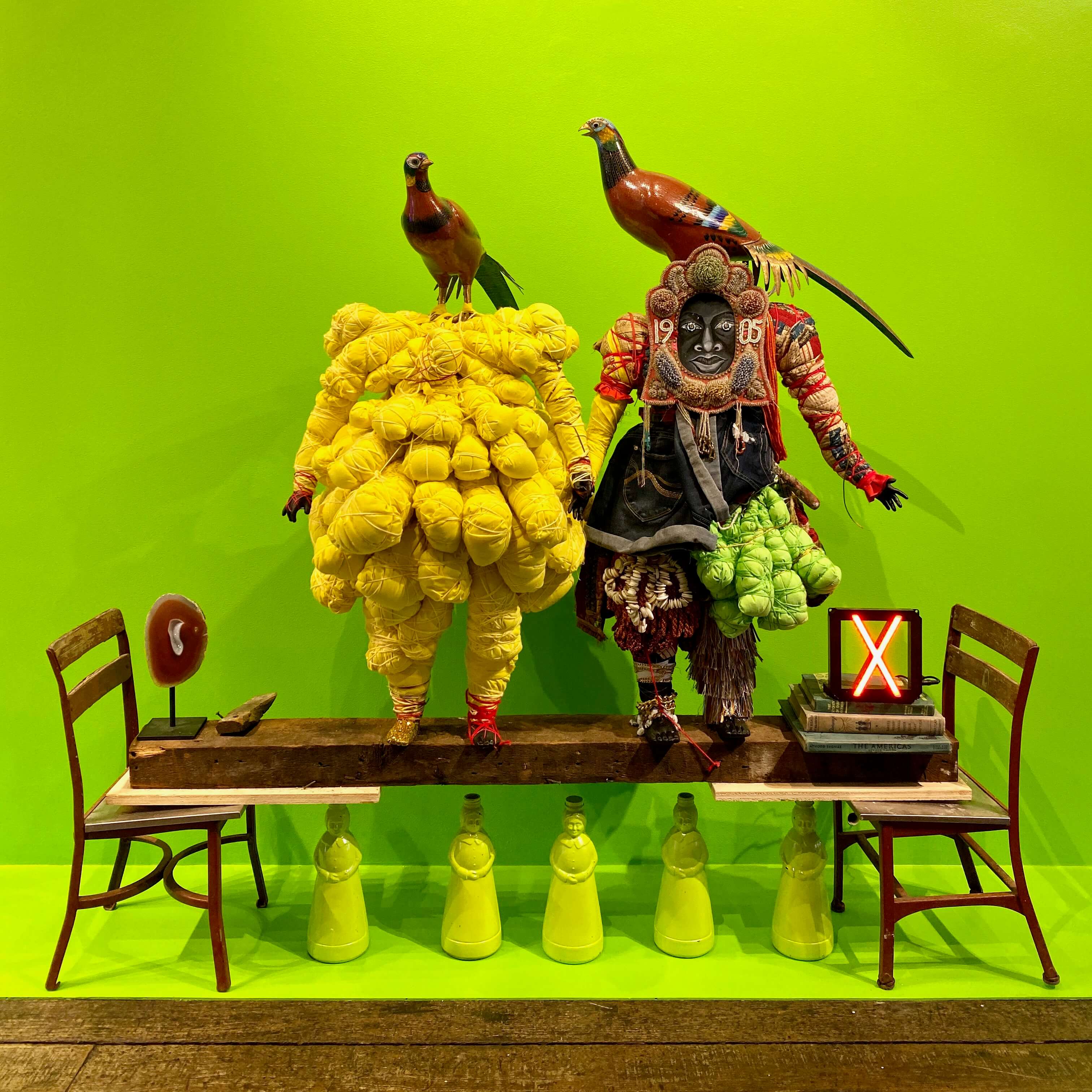 Embarrassingly back in November of 2019, I’d never been to an exhibit at Fort Gansevoort, mostly because it wasn’t quite in the realm of the other Chelsea galleries, or any other group of galleries for that matter (other than White Columns).

That being said, they’re located at one of my favorite parts of Manhattan - Meatpacking district. At first glance, you almost don’t notice it. It looks like a building that got lost in time.

Inside there are three stories of exhibition space, which was perfect for Vanessa German’s exhibit - TRAMPOLINE: Resilience & Black Body & Soul.

The ground floor of the exhibit features embellished collages that are an homage to Venus and Serena Williams, as well as a statement about how society deconstructs and dehumanizes Black women in sports instead of honoring them as the powerful individuals they are.

The exhibit also consists of beautifully intricate sculptures that German has anointed as ‘power-figures’ as well as “wall-mounted altars that each act as seers or protectors carrying with them the gift of their own human technology: joy, love, and protection for the souls of Black Americans.”

“The work is made as an act of love in response to the daily injustices and violence committed against Black and Brown people, their bodies and their souls. Each figure confronts us with the questions, “how do we survive? How do we, as hybrid people, keep breathing? How then do we surpass mere existence into creative champions, future makers, lovers even?” (source)

“I am in Love with the deep survival, elastic resilience and ordinary, creative, genius of Black People. For the ways that we make ourselves bright against the slaughter of our own names — acts of ordinary, restorative, creative insistence. The insistent force of making, seeing, playing, protection — loving — whose evidence shapes the culture of a society that never visioned the Black Body into freedom, resources, or power.” - Vanessa German

About the Artist - Vanessa German

It’s hard to find the words to describe who German is, but I’ll try. What comes to mind is Goddess, sorcerer, a literal magician with words. I’ve never felt completed captivated by hearing someone speak. It’s like she’s from another world. The word Vanessa uses for herself is ‘citizen-artist’. And what is that?

“It looks like making work and offering people purpose through the work that I am making. It also sometimes looks like I have to write poems for people whose children have been killed because they ask me to do that. Sometimes it’s hard and not romantic. But I think about how to be deeply dimensionally purposeful as a human being and in the space that I am.” - Vanessa German (source)

“German's work stands as a radical and unapologetic act of self-care, self-preservation and self-ease, an attempt to unfold past traumas and loosen the grip of longstanding tensions tied to her own Queerness, her own Blackness, her own struggle to live in the fullness of her physical and spiritual self.”

Vanessa German works and lives in Philadelphia. She is the founder of the ARThouse, a community arts initiative for the children of Homewood.

"It helped me a lot because there's a lot of violence here," she says. "So when you write and you draw and stuff you can express your feelings — how you feel living here and just put it on paper ... draw and paint about how you feel." - Vanessa German (source)

Vanessa is represented by Gavlak Gallery in LA, and Fort Gansevoort in New York.