Robert Nava's first solo exhibit in NYC, titled Angels, at Vito Schnabel Gallery, features the ultimate contrasts such as the between balance and chaos, earth and heaven, and good and evil.
Published in
Galleries 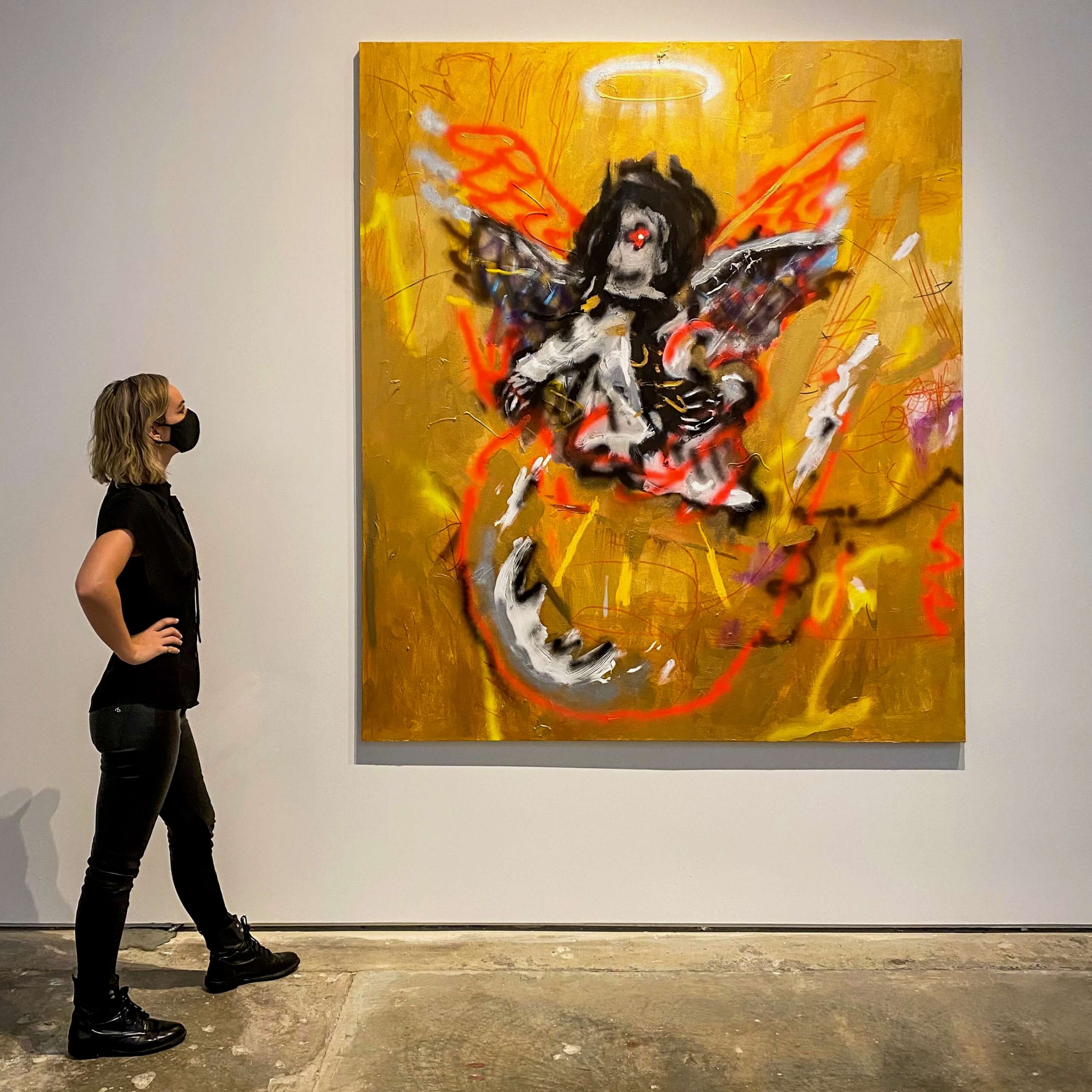 About the Exhibit - Angels

Robert Nava’s exhibit, Angels, inaugurates the opening of Vito Schnabel Gallery’s new Chelsea gallery space (which is GORGEOUS) and is on view from February 25th through April 10th, 2021.

Given the success of Nava’s career over the past few years, it’s kind of insane to think that this is his first New York City solo exhibit.

Nava absolutely did not disappoint, gracing the city with an exhibit of 16 paintings “devoted to the archetype of the seraphim, the winged figure that has animated art history since the early Christian era of the 4th century. (source).”

While Nava has a signature style, making his works immediately identifiable, his subject matter shifts depending on the exhibit. Per the title, Angels, this exhibit consists exclusively of angels (a first for Nava).

“Nava is fascinated by the ways in which history and mythology evolve over time, shapeshifting to accommodate their eras and redefining living individuals as timeless archetypes” - Vito Schnabel Gallery (source)

"I had a studio that was filled with all these monster paintings that I was working on. And the first angel happened a little by mistake and a little bit as some kind of hero to stand up to those.” That initial hero was soon joined by others: “I got into a rhythm where maybe every four or five paintings it was time for another angel. The angels taught me that they’re not all good.” - Robert Nava for Cultured (source)

“He explores the concept of the Seven Archangels and delves into the history and legends of descending angels who are enraptured by the dark undercurrents of their fall from grace.” - Vito Schnabel Gallery (source)

Nava creates a juxtaposition to the ethereal subjects by casting them against the natural elements of earth, wind, and fire. So not only does Nava create visual “balance and opposition” in his works, but metaphorically in his subject matter.

The thing that’s most impressive (to me) about Robert Nava is his ability to ‘unlearn’ traditional techniques that are hammered into an artist while attending art school. While his works appear carefree and childlike they are a result of “sketching, then painstakingly committed to canvas through a variety of layered techniques calculated to subvert any sense of planning and structure (source).”

“A scribble can have the same seriousness or weight as any other kind of mark making,” he offers, and then cites Cy Twombly, who said, “My line is childlike but not childish.” Although it can be fun to make works like these—”not all the time, they’re handled with care.” - Robert Nava for Cultured (source)

The materials that Robert uses to create these beautiful works are acrylic paint, grease pencil, and spray paint.

About the Artist - Robert Nava

Robert Nava is an American artist that lives and works in Brooklyn, New York. He received a B.A. in Fine Art from Indiana University Northwest and an M.F.A in painting from Yale University School of Art. He’s represented by Sorry We’re Closed in Brussells, Night Gallery in LA, Vito Schnabel Gallery in Switzerland, and Pace Gallery in New York.

“His work thus reacquaints viewers with an almost childlike capacity for fantasy and creativity, while offering a meditation on the loss of innocence and its recuperation.” - Pace Gallery (source)