Peter Saul at The New Museum 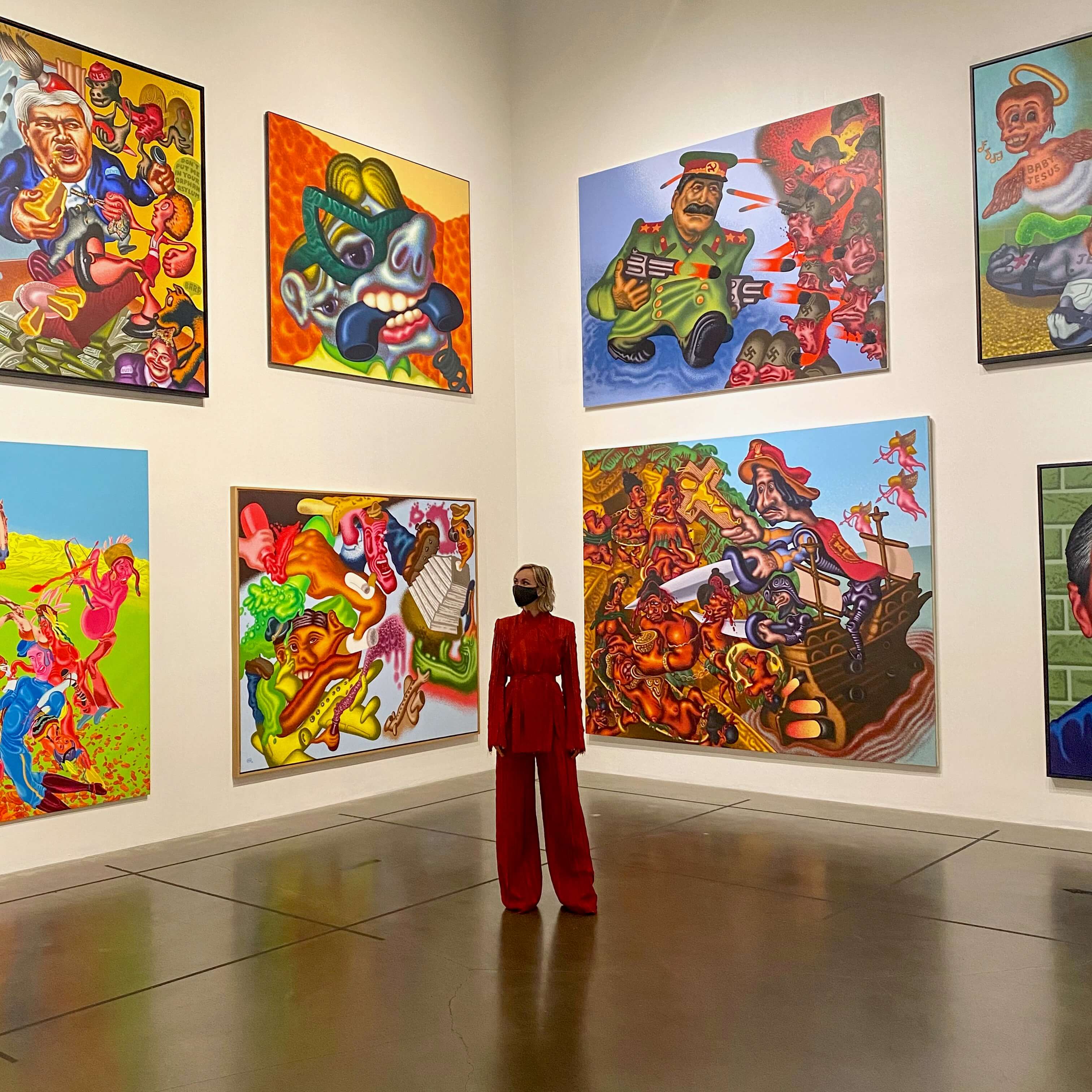 Peter Saul at The New Museum

About the Exhibit - Crime & Punishment

When Covid hit New York City, shutting down, well everything, the one regret I had was not seeing the exhibits at The New Museum. This included Peter Saul’s exhibit, Crime, and Punishment, but thankfully upon the re-opening of the city, they extended the show until January 3rd, 2021.

The exhibit spans over two floors (3 & 4) of The New Museum and includes 60 of Saul’s paintings created over his lifetime.

The top floor is the most extravagant, with paintings stacked floor to ceiling, almost like in a medieval castle.

The thing that’s really specific about Peter Saul’s work is how it’s not strictly Pop Art, devoid of emotion, but a “unique blend of Surrealism, history painting, vernacular illustration, and the real-life shock and horror of current events.”

As you wander the exhibit you can spot famous presidents such as George Bush and Donald Trump, cowboys and Indians, as well as Nazi soldiers. No subject matter is too controversial.

“Saul extended his interrogation of American history in his portraits of infamous criminals like John Wayne Gacy, archetypes like cowboys and businessmen, and US presidents such as Ronald Reagan, George W. Bush, and Donald Trump, whom Saul depicts with disdain and condemnation.” (source)

“Oh, he’s my favorite. He’s so good because he suits my art style—his shape, his hair, everything about him suits my art style. He’s a good guy for art—terrible otherwise.” - Peter Saul on Ronald Reagan (source)

One of the things I love about museum shows that bring together a sample of an artist’s lifetime of work is being able to see how their style evolves over time.

On the lower floor of Peter Saul’s exhibit, you see his older works, and how they still have airs of his style, they look quite different from what we see from him today.

“Saul’s earliest paintings, which he created in Paris, demonstrate a loose, gestural style of abstraction, yet he began to incorporate text, recognizable characters, and consumer products into his works as early as 1960”  (source)

“[In the 1960’s] he plucked figures like Donald Duck and Superman from the pages of comic books and deposited them into chaotic scenes representative of the avarice and violence of America.” (source)

“Frankly, I didn’t think as much as I’m credited as having thought. My main thought was to paint the picture. Every time I got an idea for a painting I felt lucky and then I got to it. I try not to question it. I know from having taught school that most people do too much thinking. They often talk themselves out of doing anything interesting. There would be good reasons for not doing it.” - Peter Saul (source)

About the Artist - Peter Saul

Peter Saul is an American painter from San Francisco, California. He’s considered one of the fathers of the Pop Art Movement. Fun fact: Kaws is a huge collector of his work.

“Beginning in the early 1960s, Peter Saul began to incorporate imagery borrowed from a range of pop-cultural sources into his exuberant, brightly colored paintings, adopting a style that has proven to be far ahead of its time.”

“I didn’t know about Pop Art and I was pretty upset when I read about it because I was hoping that this was only my idea. It turned out that there were a lot of people around the world that came to it at about the same time, which I guess is normal.” - Peter Saul (source)

He studied at the California School of Fine Arts as well as Washington University in St. Louis, Missouri.

You can schedule a time to see his current exhibit at The New Museum in New York City here.