Nick Cave, UNTIL at The Momentary

Nick Caves exhibit, UNTIL, at the Momentary in Bentonville Arkansas demonstrates Caves practice at epic proportions, taking the viewer on a journey to question, is there racism in heaven?
Published in
Museums 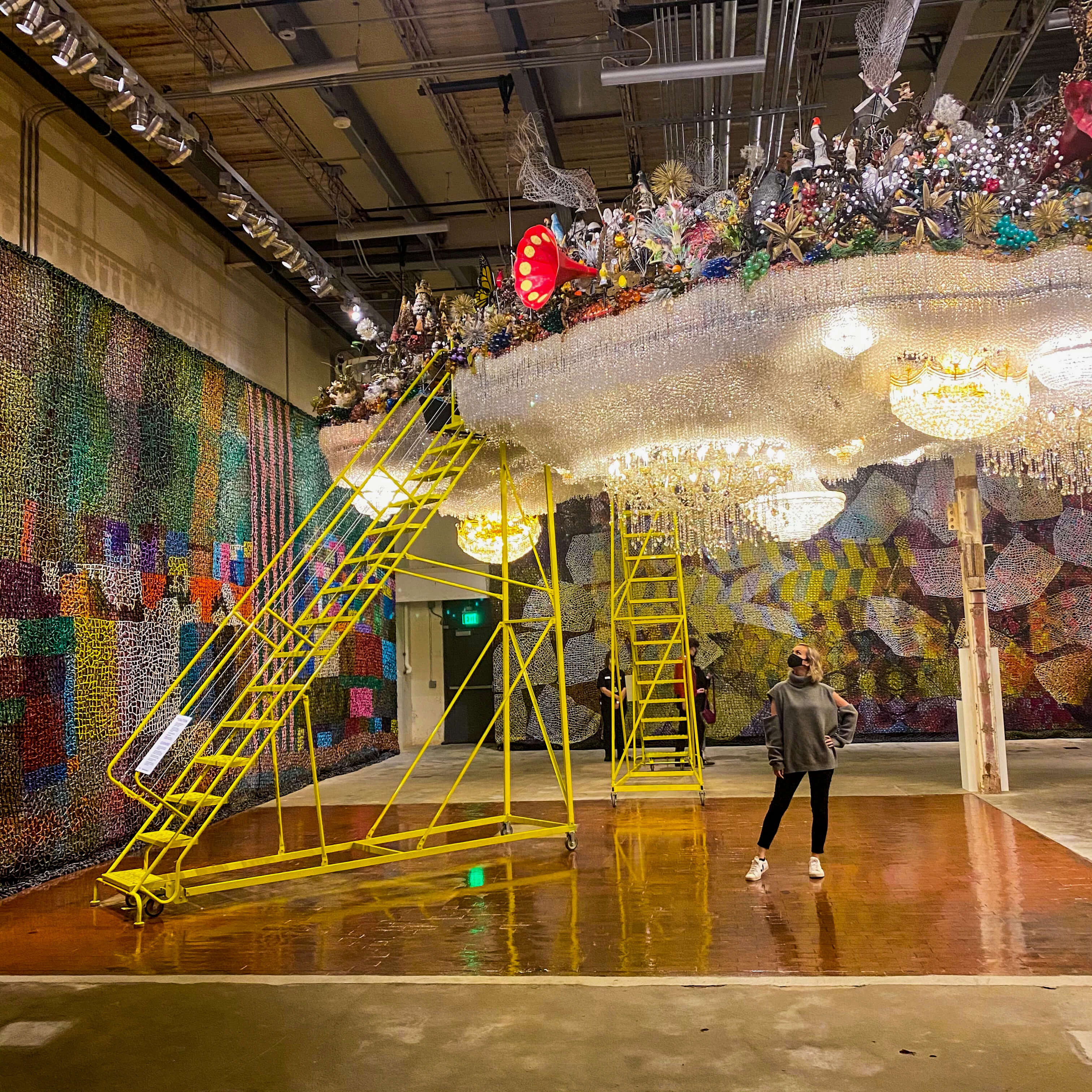 I was very fortunate to be able to visit The Momentary right when it opened in February, so I got to experience it in its full glory with food trucks, coffee shops, and rooftop lounge all in full operation. This time was a little different, but still just as enjoyable.

The Momentary, along with the Crystal Bridges Museum of Art is located in Bentonville, Arkansas, and is also a convenient five-hour drive from my parent’s home in Missouri. Bentonville is such a special town and I wanted to bring my sister and dad down for a mini trip to see all of my favorite spots in the city.

We stayed at the 21c Museum Hotel, which was an incredible experience in itself. You can read my write-up about the hotel exhibit here (yes even the hotel there had a massive art exhibit).

However, the exhibit I was most excited to see was Nick Cave’s, UNTIL, at The Momentary, which thankfully because of Covid, has been extended to run into January of 2021.

The exhibit amplifies Cave’s signature styles within his practice such as his work with sound and movement, textiles, and found objects.

The exhibit takes over 24,000 square feet of space in The Momentary. While the exhibit may look fun and colorful at first, it speaks to a deeper question of “Is there racism in heaven?.”

There are multiple parts to the exhibit that take the viewer through a ‘forest, heavenly garden, cliff wall and waterfall.’ The exhibit starts in the ‘forest.’ If you look closely at the mobiles you can see images of guns and targets, as well as an innocent, beaded deer, hiding among the ‘trees.’

"Even as Nick’s work sets the stage for collective compassion and mutual understanding, it also underscores the reality that may inhibit such futures. Among the effusive accumulation of the installation, visitors will encounter embedded images of guns, bullets, and targets - signs of the historical and contemporary violence against African Americans in this country.” (source)

After walking through a ‘forest’ of mobiles you enter a room with a video being projected across each of the walls.

The video consists of 14 ‘channels’ running on an 8-minute loop. Bob Faust is the creative director and Brian Leitner is in charge of the sound.

To make this exhibit possible, the Crystal Bridges Museum of Art partnered with MASS MoCA and Carriageworks to co-commission this incredible exhibit. The show was first on display at the MASS MoCA and then opened at The Momentary in September.

The heart of the exhibit is ‘Crystal Cloudscape,’ a sculpture made of found options decorated with chandeliers at its underbelly.

The number of materials to make this piece of art is almost unfathomable. Here are a few examples:

In this exhibit “[Nick Cave] sends forth an urgent call to address the violence that continues to spread across America, taking from us members of the African American and LGBTQ communities.” (source)

Many of the objects featured in the 'Crystal Cloudscape’ are not only found objects but racist objects they represent racism through American histories, such as blackface figures.

Cave feels it’s important to include these objects in his works in order to shift the narrative.

“All of these manufactured objects implied some sort of service. I started thinking about the skillfully placed propaganda inhabiting them. Racism is reinforced in these regressive objects, which become signifiers aiming to indicate and keep place in society. They influence the general population, demoralizing a race through design. I aim to rehabilitate the problematic, loaded object and find a place of relevance and empowerment through reuse.” - Nick Cave

“By reclaiming these objects, Cave helped ensure that history does not crumble against modern-day amnesia. The use of these relics consists not of an act of forgetting, or erasing, but, rather, of steadfastly reminding us that these stereotypes have not disappeared. Only by repossessing - by removing - these caricatures from circulation, and transforming them into agents of change, does the power dynamic truly shift.”  (source)

Off of the crystal cloudscape are two giant works hanging from the ceiling of the momentary made from beads and netting.

Both structures are created from a fishnet like material wrapped in beads, weighing over 1500 lbs.

When you walk up the staircase to the second level where you can see a different viewpoint of ‘the mountain’ you can also see the text ‘Power’ embroidered onto the piece.

"Through visual art and mixed media, Nick Cave addresses gender, race, and gun violence in America, and asks viewers to think about where we are today and what the future may look like.” (source)

Something that makes this exhibit extremely personal to me is that Nick Cave was born in Fulton, Missouri, about 45 minutes from where my parents live now ( I was born in Springfield, Missouri).

Cave also is the same age as my mom and went to her high school, which is so inspiring to see someone from a small town in the midwest become one of the most famous contemporary artists of our generation.

“Nick Cave gives us something to cherish, something that drags us through demoralization and washes us clean. Something that ignites a fire of change and, most importantly, confirms the fact that love, the right hand, must always win the fight. Or keep trying. Until.” (source)

The Momentary can be thought of as the Crystal Bridges Museum of Art rebellious younger sister, with its multiple gallery and concert spaces as well as an Onyx Coffee Shop and food trucks. It was constructed inside of an old 63K square-foot abandoned cheese factory.

“The Momentary, a satellite to Crystal Bridges Museum of American Art, is a contemporary art space in downtown Bentonville for visual, performing, and culinary arts.” (source)

"The mission of the Momentary is to champion contemporary art’s role in everyday life and explore the unfolding story of contemporary American arts in an international context by actively commissioning and exhibiting outstanding works that explore new ideas and inspire action.”  (source)

The thing I love most about the momentary is that it’s completely free thanks to The Walton Family Foundation. It’s open to the community and is a safe and beautiful space to learn about culture and enjoy oneself with friends and family.