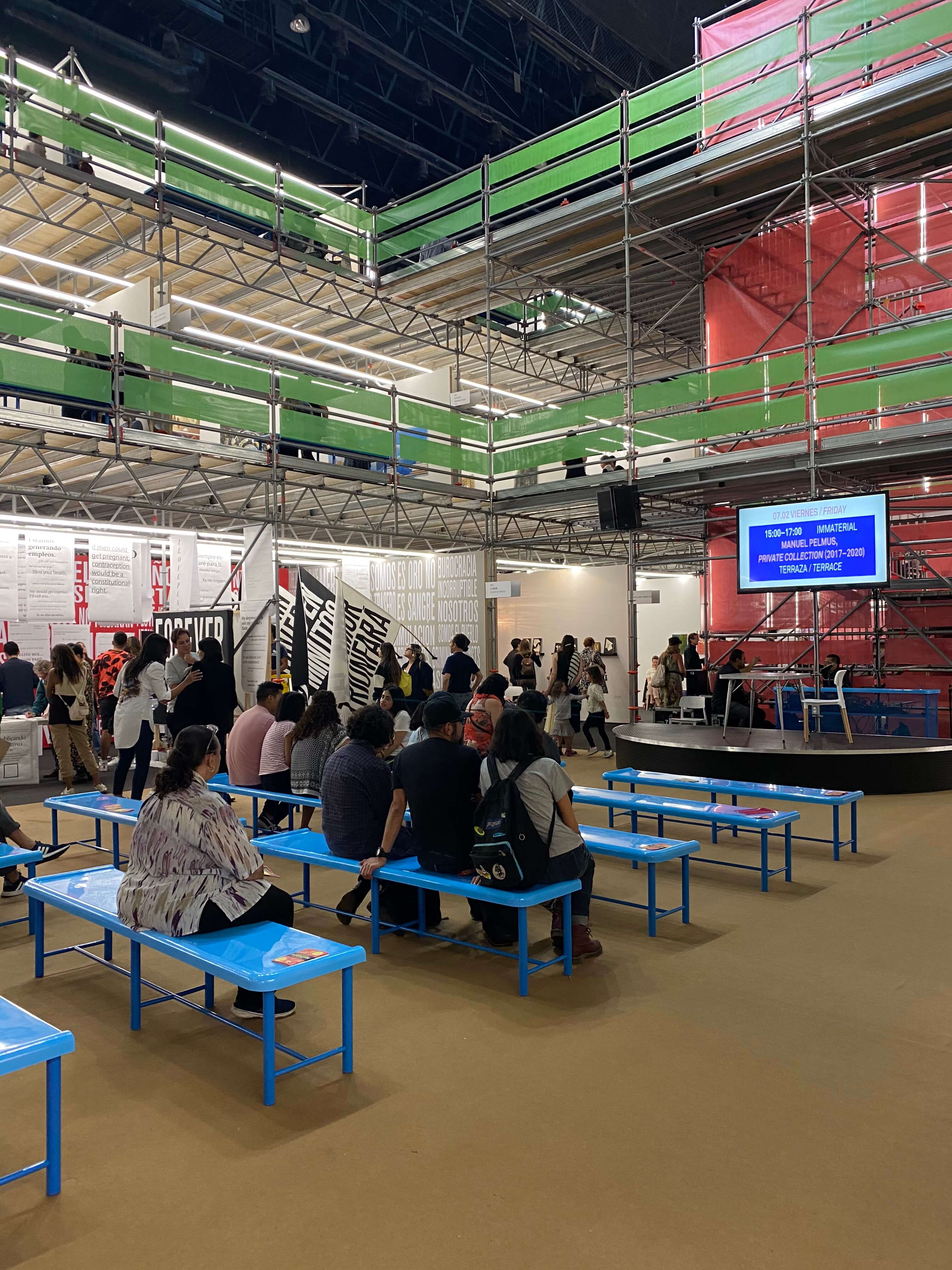 Just when I thought I couldn't love Material Art Fair in Mexico City anymore, they came back with a bang this year with THE COOLEST MERCH (see below).

The art was splendid as always, but the merch was a real banger, so thank you Material for that lovely surprise. And yes, I did go home with a t-shirt.

A little bit about the fair for those that may not know much about it...it's in Mexico City at the same time of Zonamaco. It has the equivalent of the NYC LES galleries with more emerging artists and the most unique thing about it is probably the location - at the Frontón México.

Which were my favorite booths????

Material is the kind of fair where exhibitors get creative with their booths...and it's a lot of fun to experience. For example, Mexico City gallery, OMR had booth's at both Zonamaco and Material, but for Material opted for an almost tent-like experience made of colorful textiles and works by Yann Gerstberger.

The A-list Mexico City galleries really brought it. Labor's booth consisted of 'work' by Erick Beltrán - called #nothingbutthetruth. Visitors were invited to write their favorite lies in a notebook. These are then compiled and printed in elegant typographic arrangements (see below)

My favorite work at Machete's booth is by Mexican artist Artemio. I was lucky to see an exhibition of his at Machete last year and I've been a fan ever since.

Kurimanzutto had another solo booth devoted to works by Gabriel Orozco.

The Pill is the kind of gallery that reminds me why I love going to art fairs. Being based in a country far away from mine (Turkey), and rarely frequenting the fairs I attend, it's exciting to see them in person at least once a year.

The larger than life light switches are a great representation of Monkkonen's quirky, pop art type style. It reminds me a lot of Nick Doyle's work.

Lyles & King is a gallery I frequent in the lower east side...they're consistently brining a solid group of artists to fairs and this was no exception.

Farley Aguilar is one of my favorite artists thanks to his ability to combine almost morbid figuritism (not a word) with an explosion of cheerful color. My kind of juxtaposition.

This was a gallery I'd never heard of, but I will definitely be giving them a visit next time I'm in LA. Featured are works by Aria McManus.

If I could have taken this work by Pablo Dávila home, OMG. The forumla-type scribbles gave me all the cramming for an exam in college vibes and I'm all about it.

A new take on this year's edition of Material was a complete takeover by Beverly's of the ramps leading up to each level with artworks, creating a booth you walk through on multiple levels. Some of my favorites included this work below by Dana Robinson.

Another Mexico City gallery, just killing it. This work by Dalton Gata is phenomenal.

I'm usually not into realism but these works by Justin John Greene have enough going on that my eyes just want to take it all in. And even though I can't stand Smart Object's website, I'm reminded how great the LA art scene is after seeing these booths.

And that's all folks! Another great year visiting Material, and I can't wait for next! Which were your favorites? Email me and let me know.