'I’ve Seen Gray Whales Go By' - Mary Weatherford's first exhibition at Gagosian in Chelsea, New York and my favorite of 2018.
Published in
Galleries 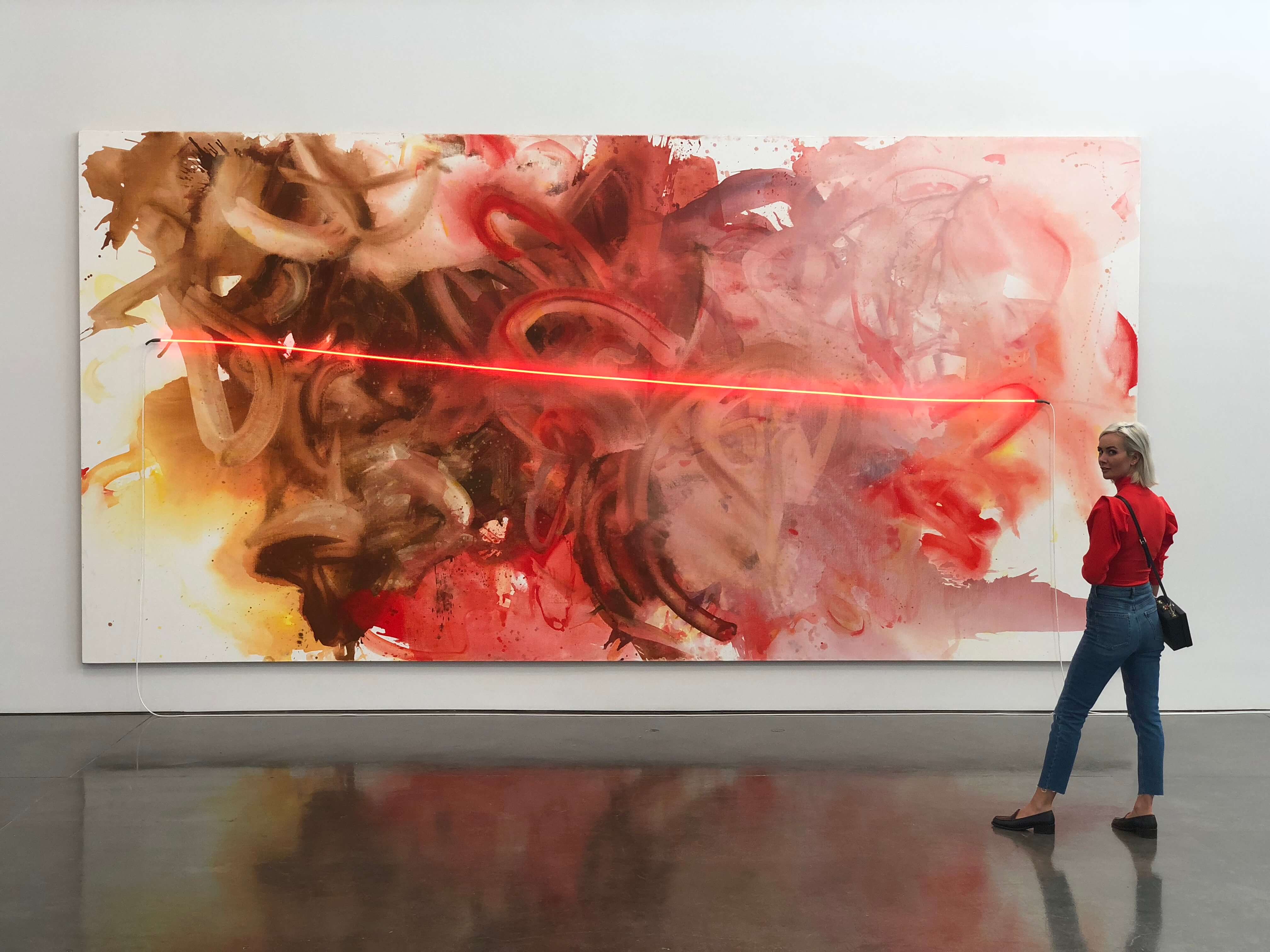 Mary Lynn Buchanan in front of a work by Mary Weatherford at Gagosian, Chelsea, New York

I’m going to go ahead and say it. This was my favorite exhibition of 2018. Especially my favorite Gagosian exhibit. I saw it when it opened on September 13th and I saw it the day it close on October 15th.

I even received the catalogue on my birthday (four days later) and it’s just as lovely.

“I’m interested in the experiential quality of a large painting,” she says. “Gigantic paintings that one can relate to with one’s body rather than with one’s eyes or mind.” - Mary Weatherford for LA Times

Mary Weatherford is an LA based painter (in my dreams I imagine her and Claire Tabouret hanging out with all their cool LA friends - even though Weatherford is slightly older). Mary works with Flashe paint which according to google is:

Flashe paint on linen is how she achieves such vibrant colors.

She also just started incorporating neon tubes into her work in 2012 for her ‘Bakersfield Paintings,’ so I think we’ll see a lot more from this amazing artist.

However, Mary wasn’t also a west coaster. She went to Princeton University where she got her B.A. She then lived in New York for a bit, working at a postcard shop where she got exposure to many artists at that time such as Robert Mapplethorpe and Jean-Michel Basquiat. (She even turned Basquiat away for not having any money to pay for the postcards)

“When I had the idea about the lights two years ago, I realized that it was a way to make a painting about the city and about the 20th century,” Weatherford said. “It’s electricity. It’s Modernism.” - Weatherford for Art in America

In my opinion Mary Weatherford is part of a string of female artists that big name galleries are starting to wake up to. In the wake of #metoo, the art world is putting more pressure than ever on their being more diversity in artist rosters and exhibitions, which thankfully have produced many exhibitions like this.

Weatherford was poached in 2017 from small New York gallery, Brennan and Griffin in Redhook. She’s also had multiple shows at one of my favorite midwest galleries - Shane Campbell in Chicago, Illinois.

“I first admired Mary’s work in MoMA’s ‘The Forever Now,’ and am thrilled she has joined the gallery,” Larry Gagosian said in a statement to ARTnews.

Weatherford is represented by the following galleries

Gagosian in New York and London.

Which is your favorite? Email me at contact@marylynnbuchanan.com