Kenturah Davis’s exhibit, (a)Float, (a)Fall, (a)Dance, (a)Death, at Jeffrey Deitch in NYC, explores how we as humans communicate with one another, through more than just words
Published in
Galleries 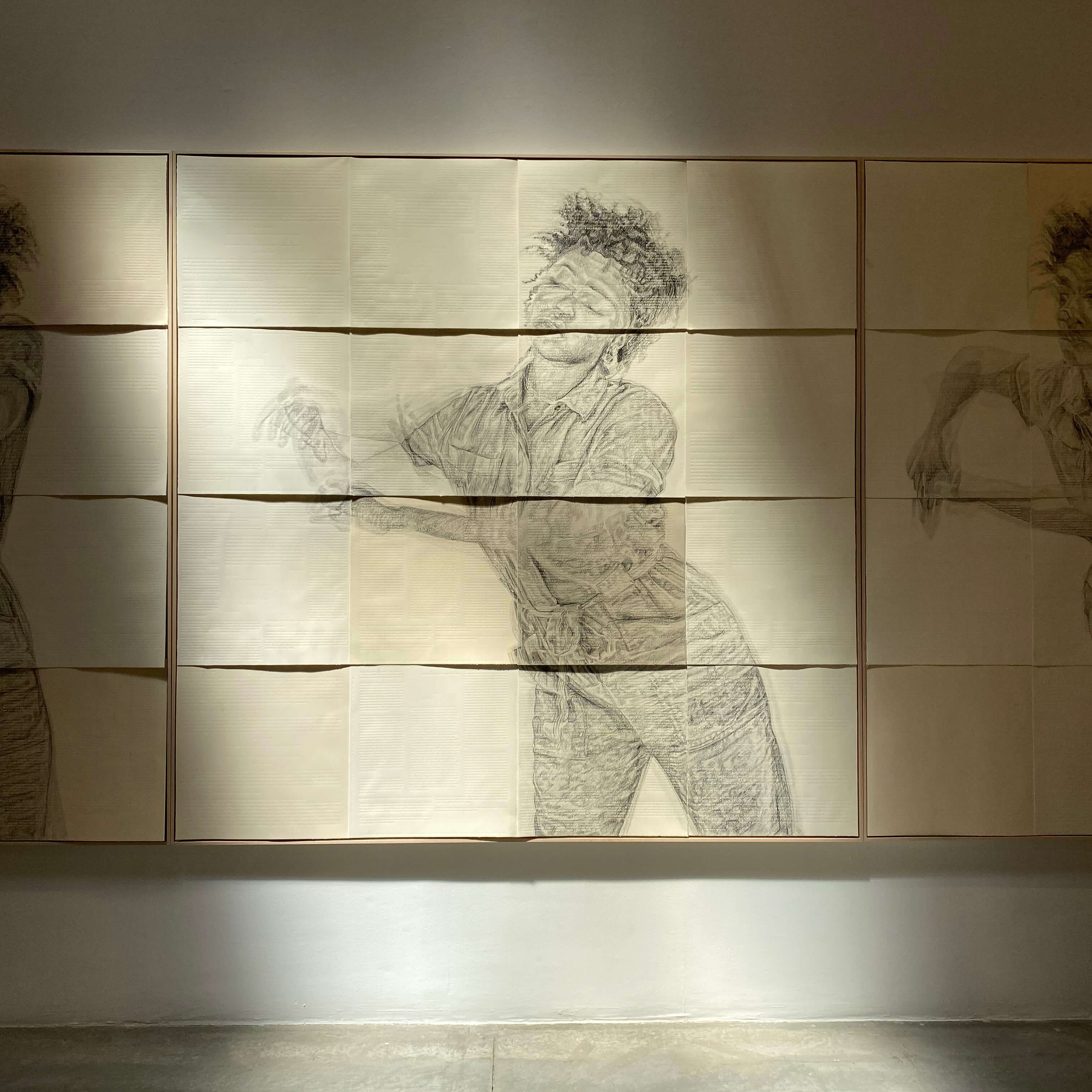 Davis’s exhibit “fuses language, figuration and performance.” (source) At first glance these look like just beautiful, large scale drawings. But if you look closer you see that these drawings are actually done on top of raised writings.

It almost reminds me of the ‘nature rubbings’ we’d create as kids, where you’d place a leaf or flower under a piece of paper and draw over it with a crayon.

However, these aren’t just any type of writings. These writings are transcripts from the Senate debates around passing the 13th amendment, which is the amendment that abolished slavery in the U.S.

“The amendment itself, in just a few lines, purports a concept of freedom by virtue of abolishing slavery on the condition that one is not a criminal. The debate exemplifies a framework that, on the one hand facilitates freedom, and simultaneously facilitates confinement. This range of outcomes is suggested in the drifting, shifting, and blurring of the figures in the drawings as they intersect the text.” - Kenturah Davis (source)

In general in Kenturah Davis’s works, she illustrates the statement that the way we communicate and language itself is so much more than just words. It’s our body language and more.

“Oftentimes, the work I make is guided by a particular way of thinking about how we’re using language. Lately, I’ve been thinking through the ways in which language fails us. Sometimes language does not seem to offer us the precise way to deliver a description about what our situation is and the conditions we’re living in” - Kenturah Davis for the LA Times (source)

To see a walkthrough of the exhibit, skip ahead to 17:37 in the video below.

About the Artist: Kenturah Davis

Kenturah Davis (no relation to Karon Davis or the late Noah Davis) splits her time between Los Angeles and Accra, Ghana. She’s a fairly young artist, having just graduated with her MFA from Yale in 2018, but she already has an impressive resume of solo exhibits and public projects.

“The work of Kenturah Davis is a lesson in seeing. Each encounter with her work reminds you that true sight is a discipline, a practice” - The LA Times (source)