Izumi Kato returns to New York for the first time in 5+ years, bringing with him an exhibit of sculptures, installations, and paintings to Galerie Perrotin in the Lower East Side
Published in
Galleries 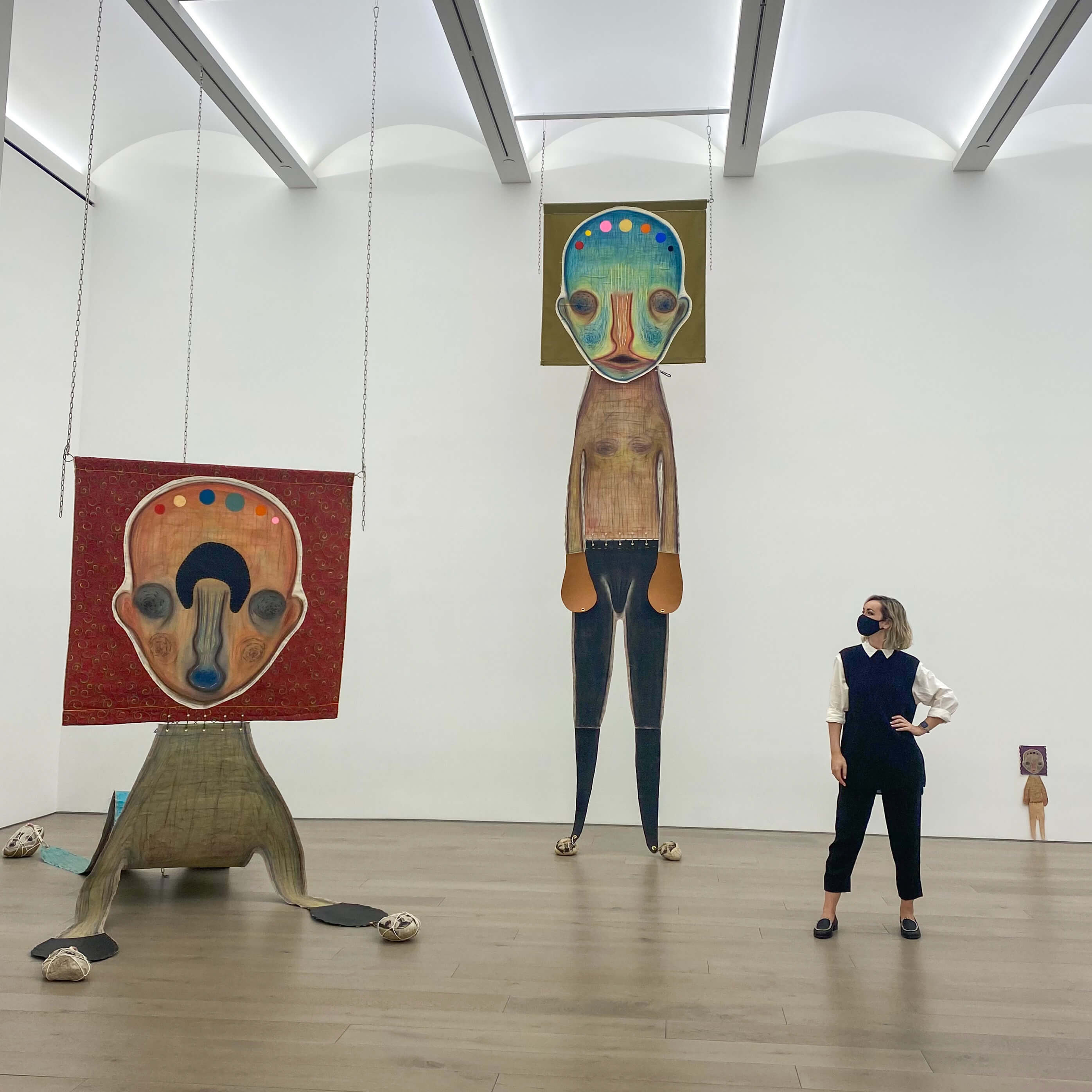 Izumi Katō’s exhibit is on view at Perrotin Gallery’s lower east side location in New York City, from March 4th through April 17th, 2021.

The exhibit spans the second and third floor of the gallery and features a wide variety of mixed-media sculptures, installations, and paintings.

The third-floor gallery, which is the largest space, utilizes the high beamed ceilings to hang Izumi’s fluid, almost paper-doll-like figures. Izumi presents a series of contrasts in these installations with the lightweight, ethereal soft sculptures hanging from heavy chains.

Similarly, on the ground in the three corners of the exhibit, you see thin, fluid figures that are being weighed down by heavy stones.

Katō’s use of materials in this exhibit is particularly significant. He uses materials that are sourced from locations where the exhibit is going to take place. So for example there are rocks that were taken from beaches in New York, and upstairs we’ll see textiles from Mexican markets.

Perrotin describes this as a sophisticated mixture of ‘figurative and folk’ which I couldn’t agree with more.

“I choose materials very intuitively. At the very moment, I see them, I judge whether they are usable or not.” — Izumi Kato (source)

The second floor of Perrotin contains the next part of Izumi Katō’s exhibit, featuring paintings and sculptures.

A fascinating fact about Katō’s paintings is that he doesn’t use paintbrushes to create them - he uses only his fingers. I’ve certainly never seen finger painting look this good.

In general Katō’s practice speaks to a few things. Firstly, the “unresolved conflict between the infantilization of Japanese culture (evident in Japan’s culture of cute) and the continued evolution of Japan’s understanding of its postwar condition (source).” These paintings are a wonderful example of that.

“Creation is always finished prematurely. The reason why is because once I have looked over most of it, it ceases to be something new for me and becomes completed.” - Izumi Kato

“Something that raises your motivation without thinking too deeply and unconditionally (other than success and failure) is something I decided is important to me.”  - Izumi Kato

In the next room are a series of sculptures that supports the second general theme of Katō’s practice which is the Japanese belief in animism - which is the belief that supernatural beings or spirits live in all things. These works do feel like they have a spirit, a personality.

See a video walkthrough of the exhibit below.

About the Artist - Izumi Kato

Izumi Katō is a Japanese artist that Lives and works between Tokyo, Japan and Hong Kong, China. He attended Musashino Art University in Toyko, Japan. While he’s best known for his paintings, he creates art in many different mediums.

“Children with disturbing faces, embryos with fully developed limbs, ancestor spirits locked up in bodies with imprecise forms—the creatures summoned by Izumi Kato are as fascinating as they are enigmatic.” - Galerie Perrotin (source)

“Bringing to mind primitive arts, their expressions evoke totems and the animist belief that a spiritual force runs through living and mineral worlds alike. Embodying a primal, universal form of humanity founded less on reason than on intuition, these magical beings invite viewers to recognize themselves.” - Galerie Perrotin (source)

In 2007, Zumi participated in the 52nd Venice Biennale International. His work can be found in public and private collections all over the world. You can explore more on his website or Instagram, or pick up a monograph of his work at Perrotin’s book store.