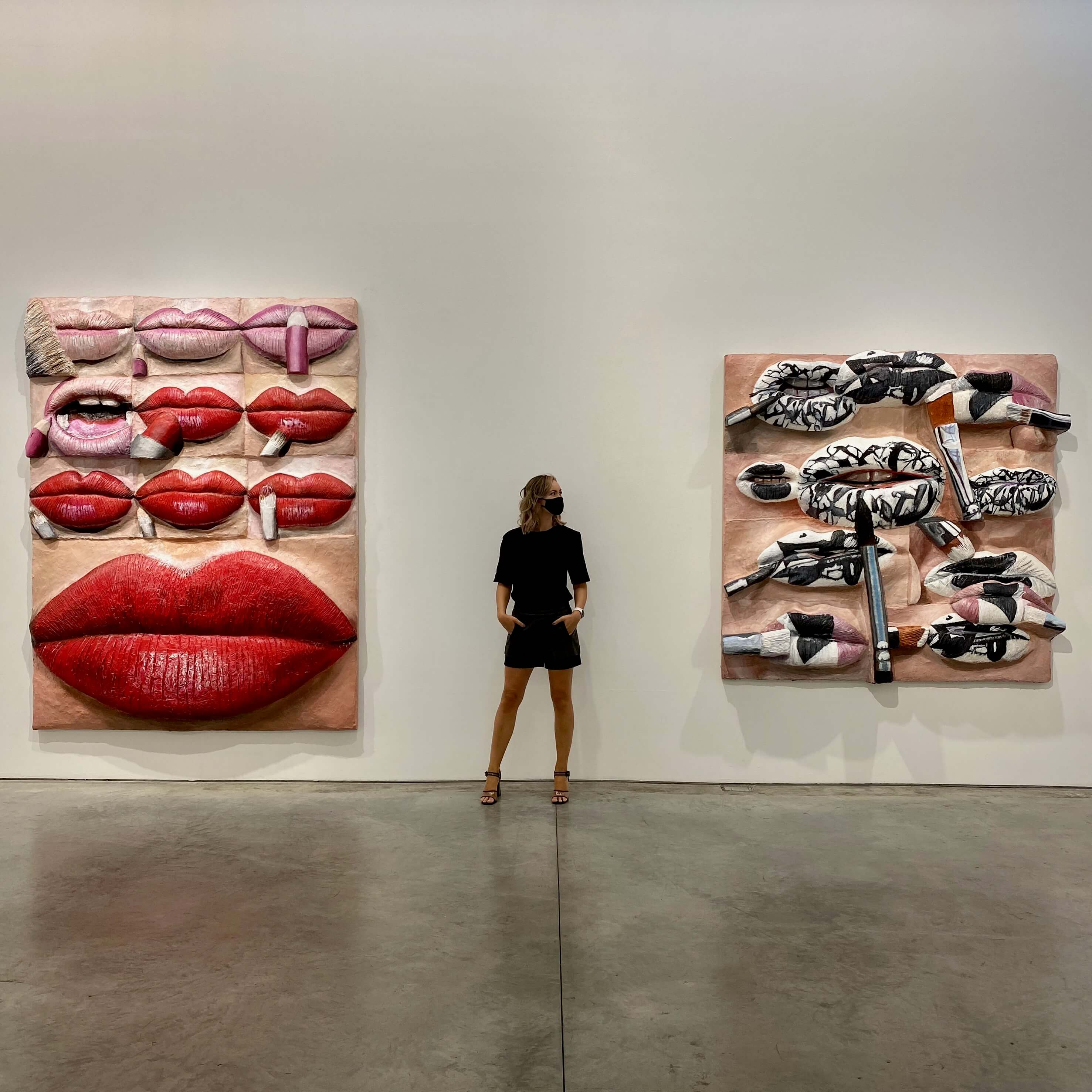 About the exhibit - World War Me

The prize goes to Gina Beavers for perfectly capturing the mood of 2020 with this exhibition title. This exhibit is Beaver’s first solo show with Marianne Boesky and is on view until Oct 17th at their 507 W 24th Street location in Chelsea.

Gina debuts an impressive number of her ‘sculpture paintings’ which “illuminate the ways in which social media has distorted and fractured our sense of self (source).”

Gina has always been inspired by Instagram and uses images she sees, particularly those of beauty tutorials, etc. to create her works.

“The exhibition’s title, World War Me–inspired by an online meme satirizing the probing voiceover of Carrie from the series Sex and the City–encapsulates Beavers’ fascination with the juxtaposition of massive global events next to myopic self-obsession, particularly seen with social media.” (source)

“Beavers spends hours scouring Instagram, YouTube, blogs, and other online sources in search of images that inspire, compel, repulse, and amuse her. In recent years, she has become particularly drawn to make-up tutorials created by both professional and amateur artists.” (source)

“I am interested in the ways existing online is performative, and the tremendous lengths people go to in constructing their online selves. Meme-makers, face-painters, people who make their hair into sculptures, are really a frontier of a new creative world.” - Gina Beavers  (source)

The works themselves are created from layers and layers of acrylic paint...sometimes over a foam foundation for her larger works.

“I am intrigued by the tools of creativity that are proliferating online, particularly when people apply these to their own bodies, from elaborate face and body painting to nail art, for the new works in World War Me, I began to use these tools on my own body, borrowing techniques from the internet to make certain artists and their work a part of my own physical self. - Gina Beavers  (source)

Gina Beavers touches on a phenomenon that the internet has unlocked for us, and that’s the ability to communicate multiple versions of yourself.

“In other recent works, Beavers explores how social media profiles and posts become endlessly self-referencing portraits, enabling the creation of multiple selves. For example, in one piece Beavers paints herself nude on her own face, and in another, the eyes of celebrities, illustrating how multiple personas and versions of oneself are generated online.” (source)

Some could see this as ‘being fake’ or putting on a show, but maybe we’re just able to finally express ourselves fully as humans, because are we really as one dimensional as people think we are on first interaction?... I don’t think so, and the internet is a platform on which we can express our many selves.

About the artist - Gina Beavers

Gina Beavers was born in Greece, and currently lives and works in New Jersey.

She received her BA in Studio Art and Anthropology from the University of Virginia, an MFA in Painting and Drawing from the School of the Art Institute of Chicago, and an MS in Art Education from Brooklyn College.

Beavers is best known for “creating paintings and installations inspired by photos culled from the internet and social media and rendered in high acrylic relief. Her series have included paintings that are based on body painting, social media snapshots of food, make-up tutorials, memes, and bodybuilder selfies.” (source)

In 2019 Beavers had an extensive solo exhibit at MoMa PS1 titled ‘The Life I Deserve’.