Genieve Figgis's exhibit at Almine Rech in London consists of abstract portraitures of imaginary quarantine companions, inspired by art history heroes such as Goya and Velázquezs
Published in
Galleries 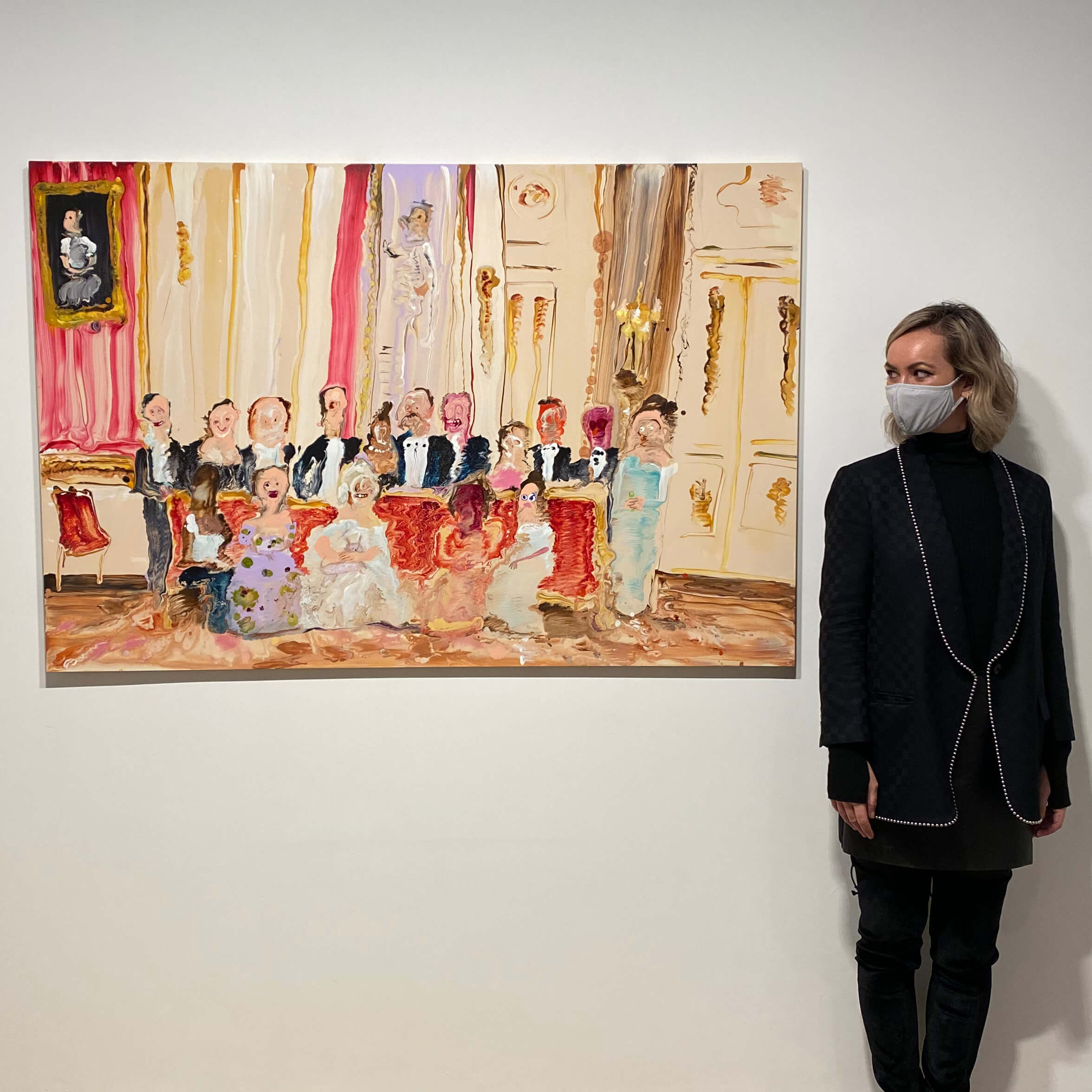 About the Exhibit - Imaginary Friends

I’ve been familiar with Genieve Figgis’s for a while, having seen it at various group shows at Almine Rech and Half Gallery’s art fair booths, so I was really excited to finally see a solo show of the artists work. All of the paintings in this exhibit have never been seen before.

“Painted over the long months of COVID-19 confinement, Genieve Figgis’ conjuring of “Imaginary Friends” came forth to fill the social void. Inspired by group pictures, found photographs, snippets of social media, and even the period costume drama “Catherine the Great,” Figgis immersed herself in lush scenes in the genre of social portraiture.” -  Alison M. Gingeras (source)

“The tension between what is depicted and what is left to the imagination—character, ambiance, genre, plot—goad the viewer to expand upon the implicitly elaborate shared social scenarios in each of these scenes, in which imagined and real friendship, royal kinship, or other fibres of the social fabric are interwoven.”  -  Alison M. Gingeras (source)

“For Figgis, her internal and external dialogue is with her personal triumvirate: Goya, Velázquez and Hans Holbein. These forebears whisper in her ear, sometimes guiding her hand and animating her imagination as part of a transhistorical painterly conversation.”  -  Alison M. Gingeras (source)

“As I made this work, I found these figures slowly surrounding me and the faces became my only companions.” - Genieve Figgis

It’s apparent these works were made in extreme isolation due to the many layers of ‘companions’ featured. Not only does she capture groups of people, but if you look closely she includes furry companions as well. In many of the portraits, the party guests are carrying little dogs and cats in their bags. This isn’t surprising since Figgis owns four dogs and a cat, which I’m assuming gave her immense comfort during this time (like my dog has).

“I have four dogs and a cat who I like to hang out with. I love living by the coast and being close to the sea. It is an important part of my daily ritual. It makes me happy.”  - Genieve Figgis (source)

Genieve Figgis has a process that consists of pouring paint directly onto the canvas in addition to more traditional methods. Similar to British artist Clare Woods, she prefers to complete her paintings in one sitting.

“The paintings take hours to make and they are made usually in one sitting. There is no backing out: you trust and have faith that it will work out in the end. I have no idea how it works out, but by instinct and from practice you just know and hope that it will.” - Genieve Figgis (source)

To see a walkthrough of the exhibit, skip ahead to 3:50 in the video below.

About the Artist - Genieve Figgis

Genieve Figgis is an Irish painter who still lives and works in Ireland. She received her B.A. in fine art from Gorey School of Art in Ireland, and a B.A. Hons and her M.F.A from The National College of Art & Design in Dublin, Ireland.

“Genieve Figgis explores history and classical art through a spontaneously messy process of painting with globs and pours, a deliciously grotesque approach to the figure.”  - Juxtapoz (source)

“Her scenes depicting bourgeois homes, traditional portraits, or landscapes are often haunted by spectral figures and leering creatures with canes and top hats. A sense of the charmingly macabre emerges from Figgis' combination of an apparent pictorial banality with dreamlike qualities.” - Almine Rech (source)