Ebecho Muslimova at The Drawing Center

Ebecho Muslimova’s exhibition at The Drawing Center features her famous alter-ego, Fatebe, the ultimate juxtaposition to the figures and expectations of the traditional art world
Published in
Museums 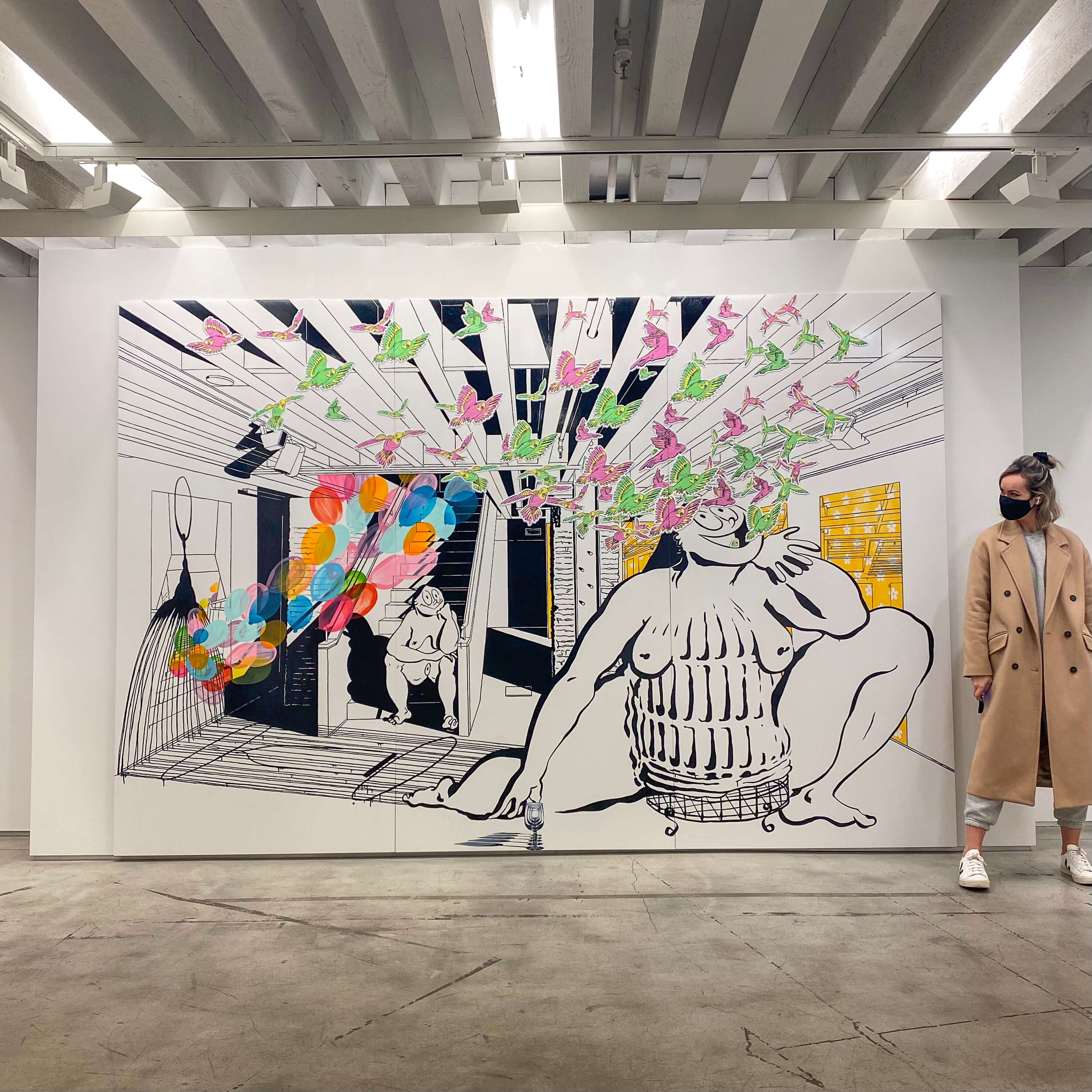 Ebecho Muslimova at The Drawing Center

About the Exhibit - Scenes in the Sublevel

Ebecho Muslimova’s exhibit, Scenes in the Sublevel, at The Drawing Center is the artist’s first solo museum exhibition, and is on view from February 5th - May 23rd, 2021.

The exhibit is a site specific installation of 10 mixed-media drawings, all featuring Fatbe - Muslimova’s fictional character.

“Muslimova is known for her pen-and-ink drawings and large-scale paintings that feature her bold and uninhibited cartoon alter ego, Fatebe. Her latest body of work uses The Drawing Center’s downstairs gallery as the stage for Fatebe’s intrepid misadventures.”  - The Drawing Center (source)

While Fatebe is now the clear star of Muslimova’s works this wasn’t always the case. Fatebe was born out of a rebellious need for an outlet during art school. In a way Fatebe is almost a huge F-you to the traditional art world that we know today...and maybe that’s why we like her so much.

“Fatebe's physical contortions and unpredictable quandaries play themselves out like performances on the canvas: each work depicts a single event that uncannily combines self-consciousness, comedy and vulnerability.” - Magenta Plains Gallery (source)

Fatebe represents the uninhibited freedom that the artist (and all of us) wish we had inside, and we can live through her in these works.

“Through Fatebe; it’s this relationship I have with her where anxieties about work are resolved. I feel like I’m always trying to clarify something through her, and when that doesn’t work for some reason it feels like there’s a big misunderstanding between what should be on the page and what isn’t. That anxiety gets resolved by making a Fatebe that’s satisfying to me.” - Ebecho Muslimova for Elephant (source)

“In Muslimova’s drawn world, Fatebe’s sense of adventure and self-exploration is never exhausted; she remains fearless and ready for her next misstep.”  - The Drawing Center (source)

To see a video of the exhibit, skip ahead to 14:08 in the video below.

About the Artist - Ebecho Muslimova

Ebecho Muslimova was born in Russia and lives and works in New york. She received her BFA from Cooper Union in New York. She’s best known for her paintings and drawings of a fictional character, Fatebe.

“Ebecho Muslimova, known for her raucous and sexually uninhibited character "Fatebe" creates paintings and works on paper that beguile the eye as much as they humor the mind.” - Magenta Plains Gallery (source)