I sat down with David Leggett in Los Angeles to ask what a day in the life of an artist looks like, how he got noticed by a gallery, what social media means to him and many more topics
Published in
Opinion 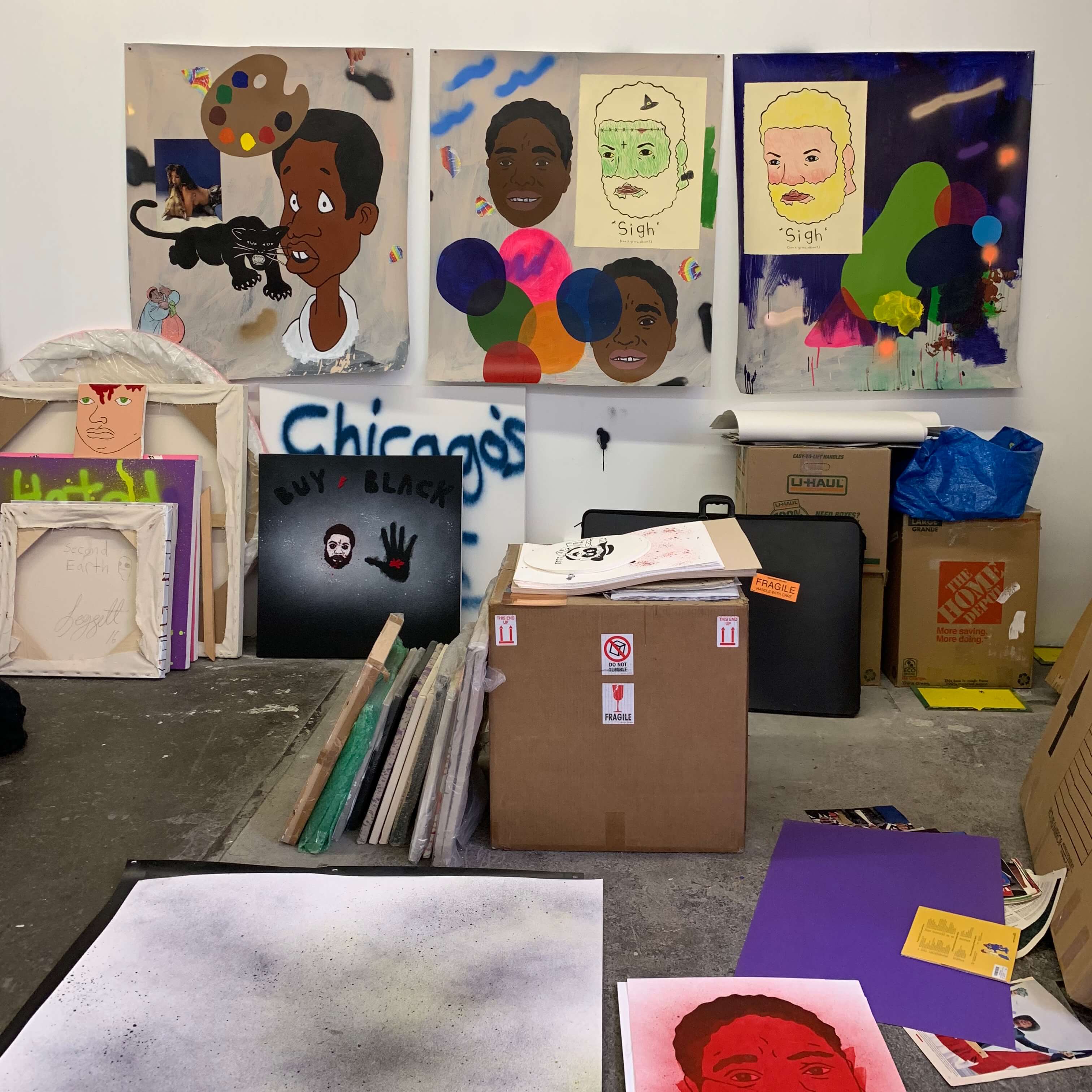 When I was in LA I had the privilege of visiting David Leggett’s studio where I got to see some of his newest works as well as ask him a LOT of questions. These included (but are not limited to) what a day in the life of an artist looks like, how he got noticed by a gallery, and he shared some interesting insights into social media and how it’s helped him connect with collectors and fans.

A little bit  of background about David…

2007 Masters of Fine Arts. School of the Art Institute of Chicago.

2003 Bachelors of Fine Arts. Savannah College of Art and Design.

ML: How would you describe your art in a sentence?

ML: You got your masters at the School of the Art Institute of Chicago and lived/worked there for awhile, are you from Chicago?

DL: No I’m originally from Massachusetts. I stayed in Chicago for 14 years. Then I was thinking of moving to New York and it just seemed like, if you’re going to do something you might as well go crazy and move to LA. (where he lives now).

ML: How did you become a full-time artist?

DL: Right out of grad school my girlfriend got me a job at a warehouse and somehow I ended up being a supervisor there, and I didn’t make art for two years. Then I got an opportunity to show at the Hyde Park Art Center and I was like “I’m going to make some paintings” - even though I didn’t make paintings. I made mostly drawings, works on paper, even though I was a painting and drawing major I was focused mostly on drawing. It’s still the strangest thing, because why would I do that?

Fast forward, my friend put me in this group show, and I’d always wanted to show at the Hyde Park Art Center because The Hairy Who showed there and I love The Hairy Who. From there I submitted my portfolio to Skowhegan and other places and it started getting traction. And that’s when I was like, I want to quit this job...and make art, which I would never do now but when you’re in your 20’s you can take that risk.

ML: So you were doing group shows, when were you picked up by a gallery?

DL: I got picked up by a gallery but then it closed really quickly. I would say that was 2012, and I think they closed 2013. I think I was in a group show, I don’t think I even showed solo there at the time and then I got with Shane (Shane Campbell Gallery) in 2016.

ML: How did you meet Shane Campbell Gallery?

Shane taught at SAIC (School of the Art Institute of Chicago) and I never met him, I never had a class with him, but his gallery was originally (I believe) in their house in Oak Park and we used to go there. Michelle Grabner also had her gallery, Suburban, which was nearby and that was the spot to go. Then they moved their gallery to its place on the South Loop of Chicago on Wabash Avenue, and then I think just by luck, Tony Lewis told Shane about me and that’s how I ended up there.

ML: On that note (of connections and referrals), how important is it for you to be connected with other artists and how do you all support each other?

DL: For me it’s very important. If I know someone who really deserves attention I’ll make sure that if we have a group show and I’m asked if I know anyone, I’m going to tell them about that person, and if I’m on nomination committees for grants and residencies I always try to put forward at least one person that I think deserves the attention, that isn’t getting necessarily getting it. You see a lot of great work but galleries don’t always see that so you need someone to push that along.

ML: What artists are you excited about right now?

DL: Robert Colescott, he’s getting so much attention now! Blum and Poe had a show of his back in the Fall that was really good. I’ve always been a fan of Jim Shaw, Mike Kelley, Sigmar Polke, just because I love what they’ve done with pop culture and subculture as well.

ML: Do you come in and just work on one thing at a time or do you bounce around to different pieces?

DL: I’m pretty frantic, there’s multiple things as you can see in here [in the studio], so there’s a selection. Some of these things have been around from 10 years ago that I've finally managed to finished now, with just one little thing, so I’m always working on multiple things.

ML: What do you have coming up this year?

DL: There’s NADA (New York Gallery Open, March 4-10), I have some works on paper there. I have a group show in Atlanta, which will also be works on paper. There’s other things I have going on but they’re not quite confirmed..I shouldn’t say anything haha.

ML: Do you have any advice for your younger self or younger artists?

DL: One of the things I did was in 2010 (shortly after going to Skowhegan School of Painting and Sculpture) I started a blog on Tumblr, there’s a lot of artists right now that are successful that started there, and that was a way to get your work out to such a large audience because not everyone can go to galleries. It’s cool that in my little apartment in Chicago someone in Berlin could see my artwork. But you need to be consistent with it, you have to put your work on social media and constantly be posting and trying to make connections. So keep making work and posting things for people to see. Also, go to galleries and get to know people, don’t expect them to come to you because that’s very unlikely.

ML: What do you think about social media (Instagram), is it enabling you to be closer to people that want to buy your work?

DL: Interestingly younger collectors will contact me and not contact the gallery, they’ll DM me and ask how do I get this, how do I get that. I forward them to Shane [Campbell Gallery] for anything sales related. I think it’s just Instagram is less intimidating than going into a white cube gallery, I think a lot of people [that reach out] have probably never been in to Shane’s space. A lot of them become friends and they come here [to the studio], they’ll visit whenever they’re in LA. I’m much more of a shy person, so it’s funny they’ll want to hang out and I’m like, ok!. It just makes you closer to people, which I wouldn’t expect.