The Crystal Bridges Museum of American Art in Bentonville, Arkansas brings together an incredible range of American artists from five centuries ago until now in a building designed by Moshe Safdie
Published in
Museums 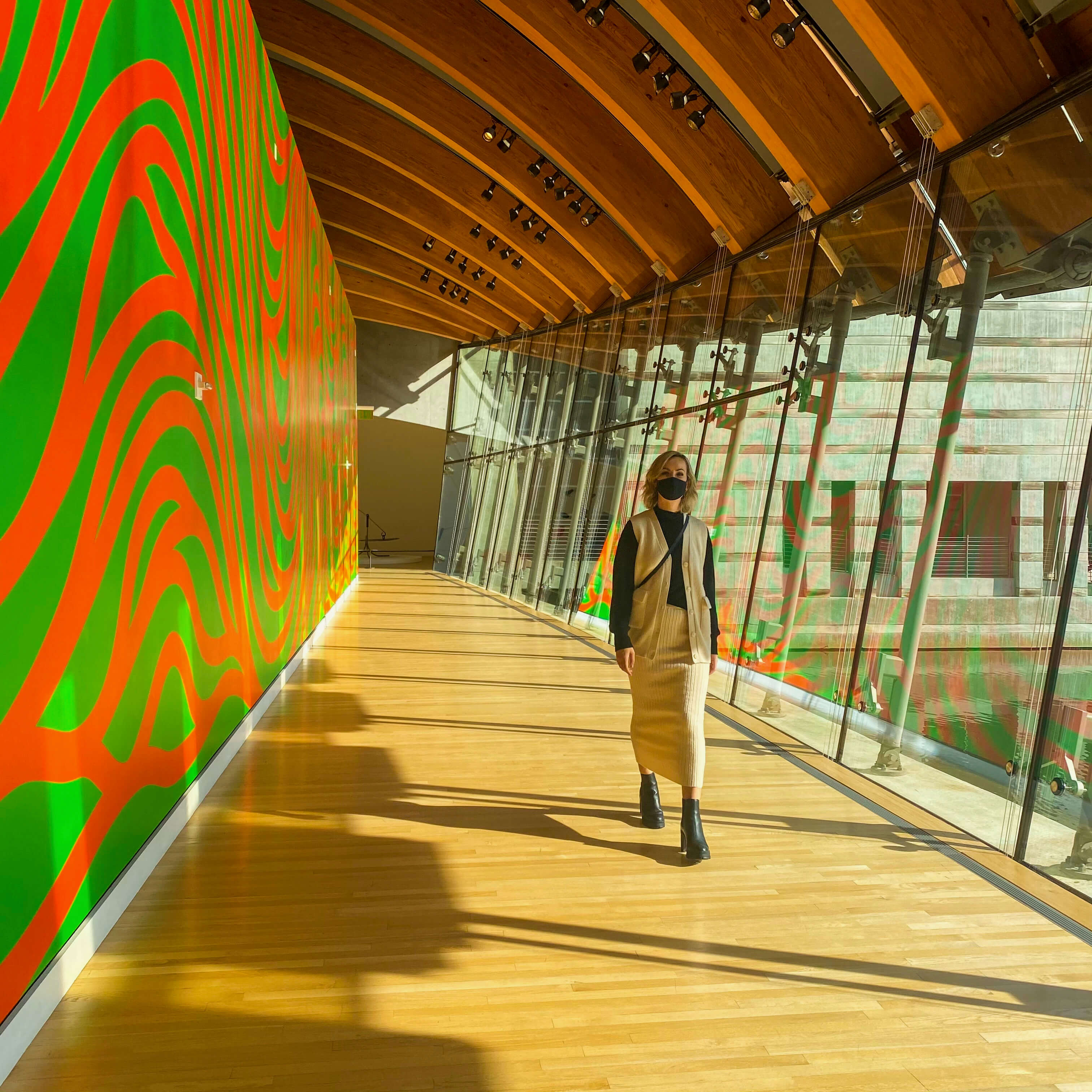 The Crystal Bridges Museum of Art in Bentonville, Arkansas is one of the most beautiful museums I’ve ever been to.

Its vibe is very in-tune with Arkansas’s state official title - the natural state’ being set down in a cavern between two hills, naturally built around a large lake and surrounded by beautiful forests and nature trails.

In fact, the museum was named after ‘Crystal Spring’ - “a natural spring on the museum’s wooded site that feeds into the museum ponds—and from the unique bridge construction incorporated into the building design”

The museum was founded by Alice Walton and designed by the architect Moshe Safdie and opened in 2011.

The art doesn’t just stay in the Museum. Sculptures and architecture are scattered throughout the grounds, so if you’re visiting, bring your walking shoes, your dog, and enjoy the trails.

Unfortunately because of Covid, the Frank Loyd Wright house was closed the day we visited, but normally you can tour this famous home. However, we still go to see sculptures by Robert Indiana, Dale Chihuly, George Segal, and many more.

They even have a Maman spider by Louise Bourgeois, which my dog was not the biggest fan of (she was trying to protect me).

Like many museums, they have a permanent collection of works (which are free to view) and rotating special exhibition space. Photographs by Ansel Adams and other notable photographers are currently on view until January 3rd.

After exploring the outside grounds we had lunch a the cafe under a large glass Jeff Koons heart sculptures. You almost feel like you’re eating inside of a large ship with the way the water reflects off of the wooden beams.

Video of my Visit

The building design by Moshe Safdie is absolutely stunning, giving you almost constant views of the water from the various galleries.

My favorite part of the exhibit is the contemporary wing.

Even since I was there in February of 2020, they’ve had several new acquisitions from the likes of Amy Sherald and Vanessa German which was exciting to see.

It's rare to see a museum which such an incredible range of artworks, and I'm particularly impressed by their contemporary works which consists of many emerging artists that I see regularly in New York Galleries.

Every-time I see this work by Helen Frankenthaler below I'm blown away by how different it is to her later works. Here her work is much heavier handed, almost picasso-like instead of light and airy like her later abstract works.

During Non-Covid times they also have a Yayoi Kusama infinity room (see my Instagram below from February).

My dad and sister really enjoyed the Modern Art wings in addition to the Ansel Adams exhibit.

I wasn't familiar with Devorah Sperber prior to visiting the museum, but I was really impressed with her installation where she utilized spools of thread to create pixilated versions of classic artworks like the Mona Lisa or the Last Supper.

When looking at the 'paintings' through the glass ball below, it looks exactly like the orginal. Such a clever piece!

This work by George Segal, below, is one of my favorite within the museums permanent collection.

Who did it better? My dad or Jim Dine. I think my dad did pretty well.

Below is one of my favorite Ansel Adams work in the exhibit, it features the San Francisco bay before the golden gate bridge was built.

Another thing I liked most about the Ansel Adams exhibit was their incorporation of other photographer’s works who have been influenced by Adams over the years.

They also included videos of these artists discussing how he influenced them which I found really engaging. Catherine Opie gave a fascinating interview, and it was cool to see works by her, Trevor Paglen, David Benjamin Sherry, and more.

I wish we’d had more time to walk the trails but it was the last stop of our trip after visiting The Momentary the previous day and staying at 21c museum hotel. I guess we’ll just have to go back soon :).