Cecily Brown’s exhibit at Blenheim Palace consists of works created especially for the palace, inspired by the art & tapestries as well as the history of the Marlborough family and Brown’s childhood
Published in
Museums 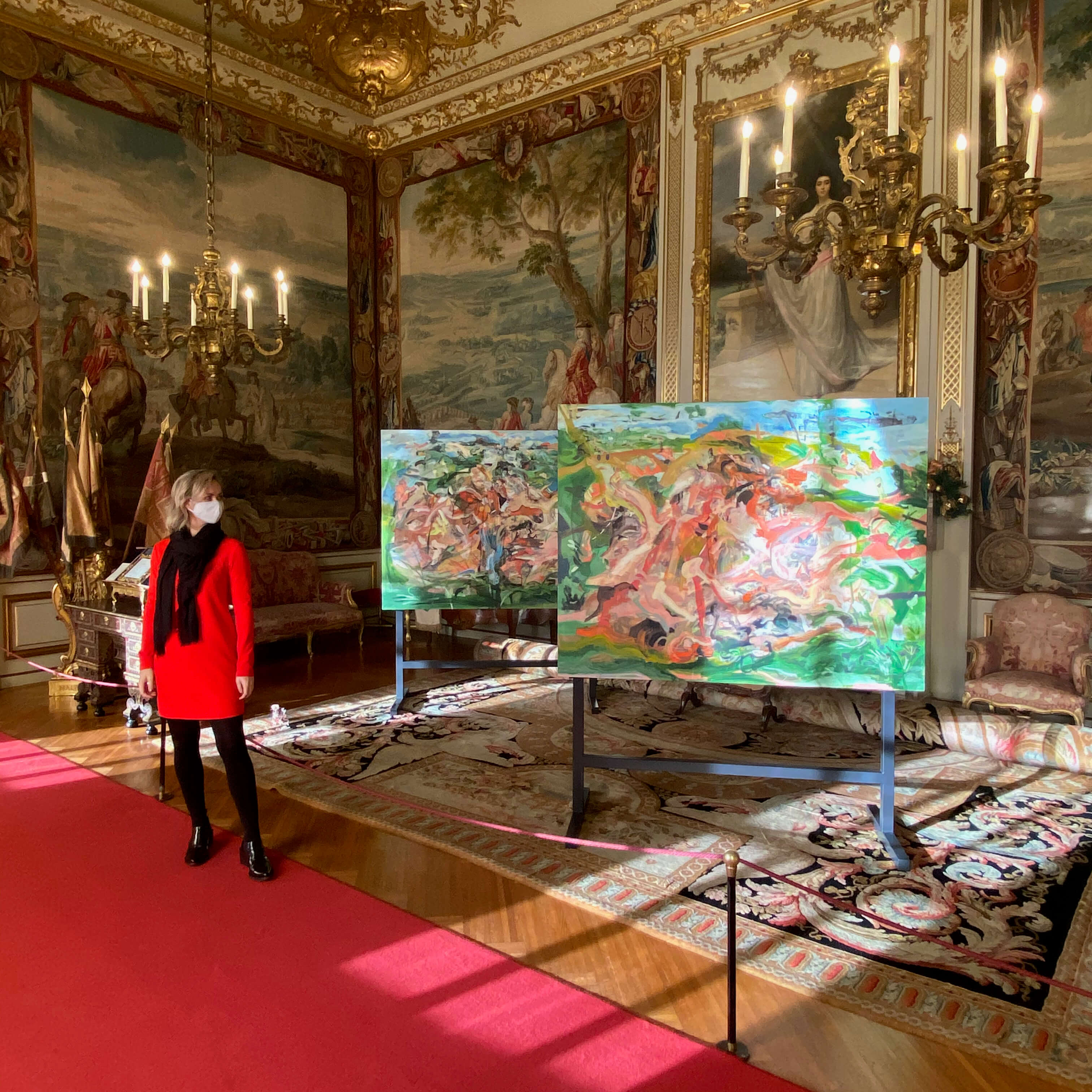 About the Exhibit - Cecily Brown at Blenheim Palace

Blenheim Palace is located in Woodstock, Oxfordshire, England, and attracts over a million visitors a year from all over the world.

“The Palace was a gift from Queen Anne to the 1st Duke of Marlborough, following his decisive victory over the French at the Battle of Blenheim in 1704.” (source)

It’s also what the movie ‘The Favourite’ was loosely based on. However, what I find most interesting is the Blenheim Art Foundation, which was founded in 2014 by Lord Edward Spencer-Churchill; brother of the 12th Duke of Marlborough (an avid contemporary art collector).

“Blenheim Art Foundation was launched on the 1st October 2014 with the opening of the inaugural exhibition Ai Weiwei at Blenheim Palace. This marked the beginning of an entirely new initiative at Blenheim Palace, offering visitors the unique opportunity to experience the work of international contemporary artists through a series of exhibitions held within the historic setting of the Palace and its celebrated grounds.” (source)

“The Foundation is a non-profit organization that aims to challenge convention, breaking away from the “white cube” aesthetic that has become synonymous with the presentation of contemporary art.”  (source)

Since it’s launch the program has hosted exhibits by the following artists:

“This is the first exhibition in the Foundation’s programme to be comprised entirely of new work created in response to the Palace, and the first devoted to contemporary painting.” (source)

Brown was inspired by the current decor of the palace and created these works specifically to complement the existing art and ambiance.

“For this exhibition, Brown has developed a significant new body of work responding to Blenheim Palace’s history as an English country estate and as the home to successive generations of the Spencer-Churchill family and their world-renowned permanent collection of paintings, tapestries and decorative arts.” (source)

The exhibit begins in the ‘Great Hall’ with her paintings hanging from the balconies. She uses red, white, and black prominently in these works as a tribute to the Churchill family crest.

In the center of the Great Hall is a display case with the artist’s source material or material she used as inspiration for the creation of her works.

Key pieces of inspiration include Blenheim’s military history, Baroque hunting scenes as well as more personal icons from Brown’s childhood in the 1970s in Britain.

In the West Side Great Hall is a work titled ‘Hunt with Nature More and Blenheim Spaniel.’ Brown is known for using animal imagery in her works, so this isn’t too far off from her typical subject matter. However, she’s made this more specific to the castle by including a spaniel in the bottom right of the artwork that’s dubbed the ‘Blenheim Spaniel’ which the 1st Duke of Marlborough used for hunting pigeon and Qual in the 1700s.

In the South Corridor that borders the Great Hall, are smaller works represent a mashup of cartoons from Brown’s childhood (she was inspired by the colors of Beano & Dandy comic strips) as well as symbols from the Marlborough coat of arms.

Honestly, despite these being contemporary artworks, they look like they’ve been apart of the castle all along.

The Red Drawing Room is absolutely breathtaking, especially with the Christmasy decor. The room contains two of Brown’s paintings ‘Hunt after Frans Synders’ and ‘The Children of the Fourth Duke.’

The Hunt after Frans Synders is inspired by a Flemish painter whose works at Blenheim Palace had to be sold off at auction to raise funds for the maintenance of the palace.

In The Children of the Fourth Duke, Brown re-imagines a portrait of Sir Joshua Reynolds (4th Duke of Marlborough) to instead focus not on the powerful Duke, but the women of the family who are often forgotten in art history. Lady Caroline, the heart of the new painting was an accomplished painter herself. We can look at this as an homage to her and the gender inequality women had to endure for so many years

The Green Writing Room are two paintings, ‘Dog is Life’ and ‘Rot and Wormwood’. ‘Dog is Life’, is positioned above the fireplace, which is no coincidence.

The painting, which puts the hunting dog front and center in place of honor (similar to portraits of the Dukes) “resonates with English tradition, evoking the devotion felt by millions of Britons towards their household pets.”

‘Rot and Wormwood’ represents Brown’s attempts to constrain herself by creating an uncomfortably small-scale painting, the smallest in the entire exhibit in fact.

The Dining Room doesn’t house any works by Cecily Brown but it is a sight to be seen, especially dressed up for Christmas.

The fresco ceiling is absolutely spectacular.

In the First State Room, Brown’s paintings are predominantly placed in the center of the room as opposed to being hung on the wall like in the Red Drawing Room and Green Writing Room.

The paintings display, ‘Spot the Spaniel’ and ‘There’ll Be Bluebirds’, are ‘happier’ than some of the more dramatic, violet abstract works depicting the hunt.

“I’ve used gardens and landscapes a lot in my work, and over the last few years I’ve realized they come from my memories of childhood, probably a longing for the “green and pleasant” land I’ve long been away from.” - Cecily Brown

Although Brown is British she’s been living in New York for decades, and this exhibit hints at her nostalgia for her heritage.

In the Second State Room is a large work title ‘The Hound with the Horses’ Hooves.’

“The painting’s title is derived from a detail in the nearby Marlborough Tapestries, a commission by the 1st Duke of Marlborough from weavers in Brussels in 1709 to commemorate his various military victories, notably at the Battle of Blenheim in 1704.” - The Blenheim Art Foundation

The Third State Room houses a very special artwork - Brown’s very first textile work. Brown was inspired by the palace’s woven tapestries and created this handwoven wool rug as a tribute. The shapes and symbols in the rug are a nod to the military symbols in the tapestries within the palace.

“Brown’s works evoke a dream-like vision of the past, reflecting on the Palace’s artworks as symbols of power and influence, their images and narratives still informing perceptions of Britain today.” (source)

The work was inspired by a fifteenth-century fresco in Palermo, Sicily.

“In the original work, Death fires arrows at a crowd of peoples, bishops, knights, and maidens. Brown replaces these figures with her own cast of characters relating to the exhibition including hunters, soldiers, animals and figures of nobility drawn from the portraits hanging around the palace.” - The Blenheim Art Foundation

If you visit the palace I would recommend you dress warmly (if it’s winter) and wear comfortable walking shoes because the grounds and gardens surrounding the castle are worth exploring.

In fact, ‘The Harry Potter Tree,’ or a “300-year-old Cedar of Lebanon tree which sits alone by a lake at Blenheim Palace is where part of "Order of the Phoenix" was filmed” (source)

In addition to the lake and forests, you can explore fields filled with local wildlife - sheep and cows.

But given that it’s Christmas, the most exciting thing to see at Blenheim Palace is the Christmas light show.

The palace gardens are impeccably decorated with Christmas decorations and music. Unfortunately, my camera died shortly into it, but you get a little sneak peek at the magic of it below.

To view a walkthrough of the exhibit, skip ahead to 1:59 in the video below.

About the Artist - Cecily Brown

Cecily Brown is a British artist that lives and works in New York. She received her BA in Fine Arts from the Slade School of Art, London.

"Considered one of the foremost painters of her generation, Brown is best known for her large-scale, vivid, gestural paintings which toy between abstraction and figuration in turn.” (source)

“I’m from a small town where my friends laughed at the idea that I could possibly be an artist. But, I’d been saying I wanted to be an artist all my life, so there was encouragement.” - Cecily Brown (source)

“Her style displays the influence of a variety of painters, from Francisco de Goya, Willem de Kooning, Francis Bacon, and Joan Mitchell, to Old Masters like Rubens and Poussin, yet her works also present a distinctly female viewpoint.” (source)