The first Biennale, that influences all Biennales to date, the 58th Venice Biennale saw the future that was ahead for us, warning..."May You Live in Interesting Times."
Published in
Art Fairs 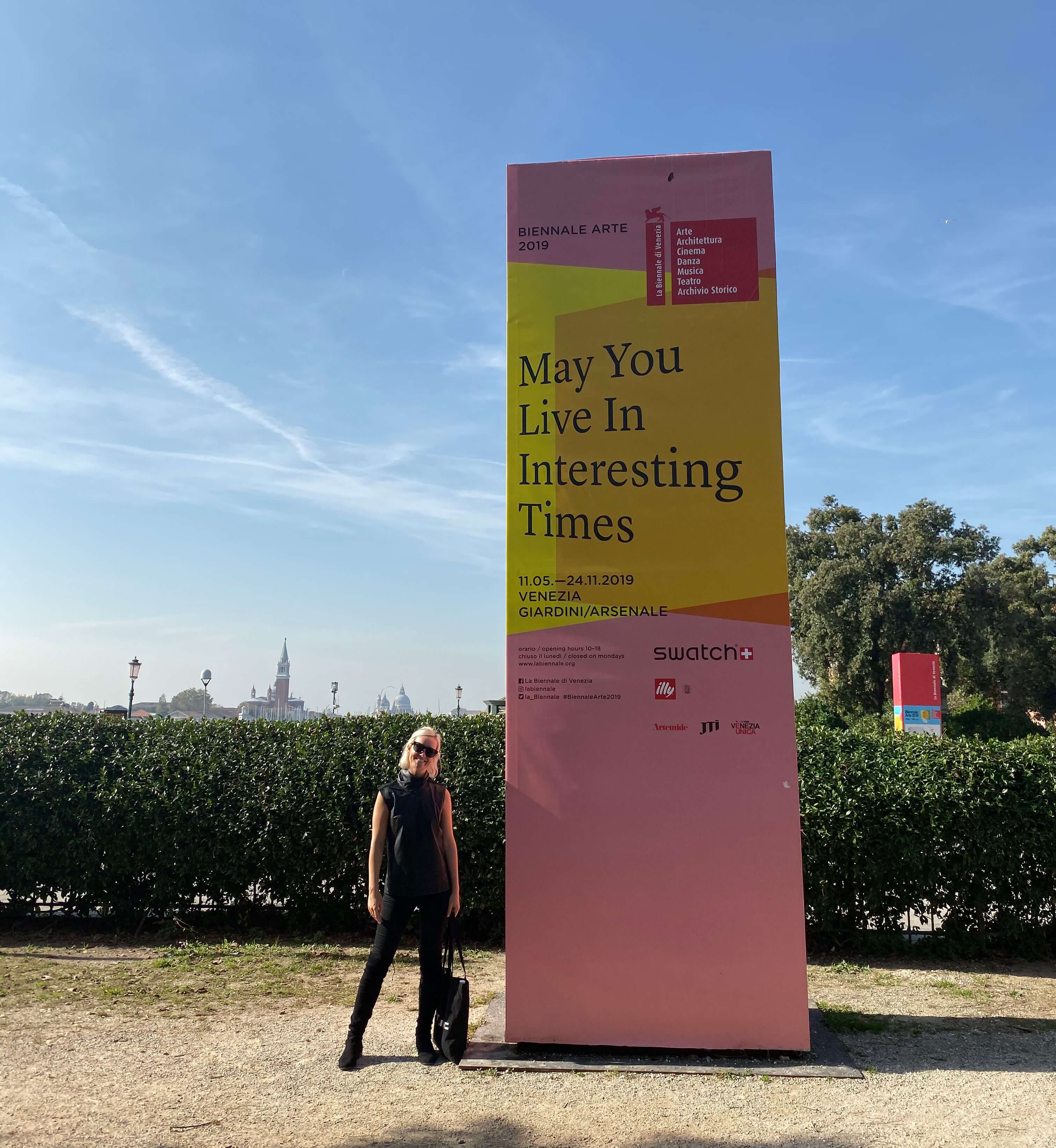 The 58th Venice Biennale was on view from Saturday, May 11th to Sunday, November 24th, 2019. The 58th International Art Exhibition, titled May You Live In Interesting Times, was curated by Ralph Rugoff and organized by La Biennale di Venezia chaired by Paolo Baratta. This was my first time visiting not only the Venice Biennale, but Venice in general, so if you’ve never been and would like to visit, I wanted to break down how the Biennale is structured and why it’s so special.

“The title of this Exhibition could be interpreted as a sort of curse, where the expression “interesting times” evokes the idea of challenging or even “menacing” times, but it could also simply be an invitation to always see and consider the course of human events in their complexity, an invitation, thus, that appears to be particularly important in times when, too often, oversimplification seems to prevail, generated by conformism or fear.” - President Paolo Baratta (source)

The Biennale is original Biennale dating back to 1895, and last year it hosted 79 artists from all over the world. It happens every two years, in odd years, for example, 2019, 2017...etc.

There were three ‘main’ areas that the Biennale was organized across. There are the famous country pavilions (29 of them), which are essentially little museums built by each country where they host a new artist for each Biennale. The other two areas were much larger warehouse-type spaces with many artists under one roof. While the country pavilions were interesting I actually preferred the art and organization in the larger spaces, the Central Pavilion at Giardini and the Arsenale.

The Arsenale was (personally) my favorite part of the Biennale, and hosts younger artists and artists of a national origin not represented by the permanent national pavilions. The space has a very industrial feel having once been a shipyard, scattered with sheds and warehouses. In 1999 a million-dollar renovation made the space what it is today.

When entering the Arsenale, the first thing you see is this larger-than-life George Condo. What a way to start the Biennale.

Tavares Strachan had a number of works in both main areas of the Biennale (the Central Pavilion and the Arsenale).

Below is a piece by Indian artist Shilpa Gupta, titled 'for in your tongue, I cannot fit'  is based on a poem by the 14th century Azerbaijani poet Nesimi and is about the strength and power of the written (and spoken) word, and how those in power feared them.

Below are two works by Chinese artist, Yin Xiuzhen, who's "best known for her sculptures and installations that explore themes of the past and present, memory, globalization, and homogenization." (source)

Below are works by Uraguayan artist, Jill Mulleady.

"Jill Mulleady’s practice shifts between close observations of everyday reality and highly elaborated imaginary worlds. In her work, references to historical painting are put into communication with images taken from both popular culture and personal life, creating a strange feeling of merged, multiplied temporalities." (source)

Below are two sculptures by American artist Nicole Eisenman. Eiseman also had sculptures at the 2019 Whitney Biennale, although she's known for her paintings, which you can see more of at the Central Pavilion.

Below are paintings by Kenyan artist, Michael Armitage.

"Michael Armitage's paintings weave multiple narratives that are drawn from historical and current news media, internet gossip, and his own ongoing recollections of Kenya, his country of birth." (source)

One of my favorite works from the Biennale is pictured below, by German artist Alexandra Bircken. Unfortunately it's a little blurry, but you can still pick up on it's haunting beauty.

Above and below are works by Argintiian artist, Ad Minoliti.

Singer is the youngest artist ever represented by Hauser & Wirth at the age of 32 (2019).

Below are sculptures by artist, Jimmie Durham.

Durham was the recipient of the Golden Lion for Lifetime Achievement.

"I have nominated Jimmie Durham for the Golden Lion for Lifetime Achievement of the 58th International Art Exhibition based on his remarkable accomplishments as an artist over the past six decades, and in particular for making art that is at once critical, humorous and profoundly humanistic." - Ralph Rugoff (source)

The Central Pavillion at Giardini

The Central Pavilion was built in 1894 by Enrico Trevisanato. Until 1905 all artists exhibited here without any obvious division (by country). As you can see below starting in 1907, countries started building their individual pavilions. Over the years the Central Pavilion underwent many renovations, and in 2011 became the space you see today. The Central Pavilion serves as a central exhibition space based on the exhibit’s theme, which was “May You Live in Interesting Times,” and is curated by the Biennale's director - Ralph Rugoff.

Pictured below are paintings by American artist, Nicole Eisenman.

Prior to visiting the Biennale, the only work I'd see on social media was the industrial-blood-machine, below by Chinese artists Sun Yuan and Peng Yu. This is strange to me since this was one of the more underwhelming works in the Biennale (IMO).

More enthralling were these works on the opposite wall by Norwegian artist, Frida Orupabo.

Below is a work by Slavs and Tatars, "an art collective and "a faction of polemics and intimacies devoted to an area east of the former Berlin Wall and west of the Great Wall of China known as Eurasia". Founded in 2006, the group’s work is centered on three activities: exhibitions, books and lecture performances." (source)

This was another favorite of mine from the Biennale, this room by American artist Alex Da Corte.

Below are works by Nigerian artist, Njideka Akunyili Crosby, who lives and works in LA.

Having only seen Tavares Strachan's neon works, it was exciting to see the works below, which highlight his immense range.

"Tavares Strachan’s artistic practice activates the intersections of art, science, and politics, offering uniquely synthesized points of view on the cultural dynamics of scientific knowledge.  Aeronautics, astronomy, deep-sea exploration, and extreme climatology are but some of the thematic arenas out of which Strachan creates monumental allegories that tell of cultural displacement, human aspiration, and mortal limitation." (source)

Below is a list of the 29 country pavilions, In order from oldest, starting with Belgium that was constructed in 1907, to the newest, Korea which was built in 1995. Next to the country is the architect of the building. (source)

Below were some of the most interesting, dedicated country pavilions that stood out to me (in no particular order). I will say Russia and Venezuela were my absolutely favorite.

"MONDO CANE was selected and announced as Belgium’s representation to the Biennale in July 2018 by the Minister of Culture of the Fédération Wallonie-Bruxelles. The project depicts a society that is folded in on itself where tradition is erected as a refuge." (source)

"The concept for The Measurement of Presence was prompted by a reflection on the history of the biennale, the location, discussions with the artists, and the current discourse. Nowadays, the permanent flow of people and artefacts break boundaries and produce new identities outside and separate from nation states. Places and societies are becoming ever more interconnected in our globalised world. But, on the whole, globalisation also causes alignment, and imposes prevailing principles. As a result, we risk losing the specific. The Measurement of Presence will be a post-national presentation that reassesses and debunks these notions and mechanisms." (source)

"Puryear’s enduring approach has galvanised his sculpture made by hand in the studio for more than five decades: issues of allegiance, democracy, and liberty have long propelled him. Viewers can learn how an artist’s treatment of a symbolic but tangible human subject – namely, liberty – can be best expressed in sculptural form through an abstract visual language of great originality and certitude." (source)

"Weather Report: Forecasting Future’ takes as its theme the relationship between human and non-human actors, in what the curatorial statement calls ‘an age when climate change and mass extinction are threatening the future of life on Earth."(source)

"We have come to show by way of three metaphorical windows a long construction of collective history and an extensive anecdote filled with challenges and rebellion. The window as a metaphor is a threshold that communicates spaces, exchanges light, air, and gaze. Venezuela exalts its libertarian identity, woven over the centuries, and shares it in a clear gesture of invitation to the complicity of other views. These windows are the seductive element that summons curiosity and the need to know. We also confess an underlying desire to see ourselves as a people along the paths of history." (source)

Another favorite was the Russian Pavilion, featuring works by Alexander Sokurov and Alexander Shishkin-Hokusai, curated by Mikhail Piotrovsky.

The exhibit is based on the Gospel of Luke and the Parable of the Prodigal Son, and more specifically Rembrandt's painting of the topic - which is why you feel like you've walked into a Chiaroscuro painting.

Which artists or pavilions were your favorites?